England's powerful batting line-up was skittled for just 167 by New Zealand as the unfancied Black Caps took a firm grip on the opening Test in Dunedin. 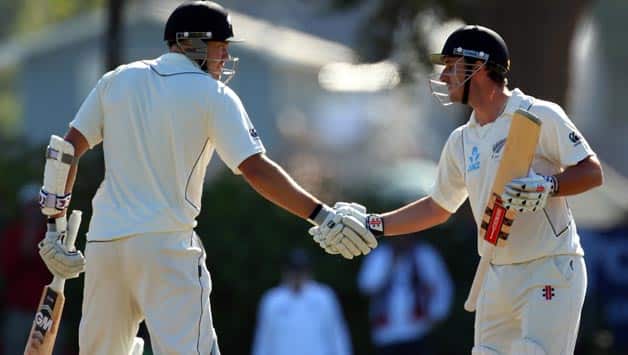 England‘s powerful batting line-up was skittled for just 167 by New Zealand as the unfancied Black Caps took a firm grip on the opening Test in Dunedin.

England’s batsmen self-destructed in two nightmare sessions on a tame pitch, offering a succession of rash shots in the face of disciplined bowling from debutant Bruce Martin and Neil Wagner, who each bagged four wickets.

In reply, New Zealand made the most of batting-friendly conditions at University Oval to plunder 131 runs without loss at stumps, with Hamish Rutherford, also making his debut, unbeaten on 77 and Peter Fulton 46 not out.

After the first day’s play was abandoned due to bad weather, England lasted just 55 overs against the eighth-ranked team in Test cricket, Jonathan Trott top-scoring with 45 on a day when the tourists’ big names failed to fire.

Trott said England had only themselves to blame for the dismal performance.

“There’s no place for feeling sorry for ourselves or thinking we didn’t get the rub of the green because you earn that in cricket, you earn the right to put the opposition under pressure and we didn’t do that today,” he said.

“The shots were on, we just didn’t execute them right.”

Tim Southee grabbed an early breakthrough for New Zealand to dismiss Nick Compton for a duck in the third over, putting pressure on the opener, who faces calls for Joe Root to take his spot at the top of the order.

Left-arm paceman Wagner, a late inclusion in the New Zealand side after an injury to Doug Bracewell, then claimed the wickets of Alastair Cook (10) and Pietersen (0) in successive balls to leave England reeling at 18 for three.

Pietersen, short of cricket after playing only one warm-up match for meagre returns of 14 and eight, was trapped lbw by Wagner off his first ball at the crease.

Ian Bell and Trott dug in for a partnership of 46 before Bell fell for 24 trying to drive Wagner through mid-wicket, instead scooping the ball to Rutherford.

Root (4) departed just before lunch after tentatively swiping at a Trent Boult delivery and edging to Dean Brownlie in the slips, leaving England, second in the Test rankings, 71-5.

Left-arm spinner Martin kept up the pressure on the middle order, dismissing the dangerous Matt Prior for 23 and then enticing Trott into a sweep shot that caught the top edge and carried to Boult.

Stuart Broad (10) tried to hit the spinner out of the park but instead sent the ball straight to Brownlie on the boundary.

With England teetering on 119-8, Steven Finn (20) and James Anderson (23) added useful tail-end runs before Anderson gifted Martin his fourth wicket with a wild swing that flew to Wagner at point to close the innings.

Rutherford, the son of former Black Caps skipper Ken Rutherford, brought up his half century off 65 balls, including eight fours and a six which hit the head of an unfortunate spectator, who looked dazed but otherwise unhurt.

Nothing went right on a frustrating day for England, with Broad missing a caught and bowled opportunity off Rutherford on 52 and Pietersen dropping a catch from the debutant when he was on 64.

Fulton, recalled after a three-year absence, will aim to bring up his half century early Friday as New Zealand look to overhaul the narrow 36-run deficit and turn the screws with a big first innings lead.

Mohali pitch will be different from Chennai and Hyderabad