New Zealand opted to bench their spearhead bowler Tim Southee who was last time benched against India back in 2012. Instead of Southee, the Kiwi s opted for spinner Jeetan Patel as the wicket was expected to assist the spinners.

Neil Wagner s two wickets rattled South Africa early on in the first Test as visitors reached a total of 63 for 3 at the stroke of lunch on Day One at University Oval, Dunedin. Wagner took the wickets of Hashim Amla (1) and JP Duminy (1) in a matter of 5 deliveries to leave the hosts jostling in the first session of the three-Test series opener. Apart from Wagner, fellow pacer Trent Boult took the wicket of Proteas opener Stephen Cook (3) to draw the first blood. At present, the visitors have opener Dean Elgar (36) and their skipper Faf du Plessis (18) at the crease who have constructed a vital stand of 41 runs off 66 deliveries. LIVE SCORECARD, New Zealand vs South Africa: 1st Test

Winning the toss, du Plessis opted to bat first as the wicket looked conducive to batting. New Zealand opted to bench their spearhead bowler Tim Southee who was last time benched against India back in 2012. Instead of Southee, the Kiwi s opted for spinner Jeetan Patel as the wicket was expected to assist the spinners.

The hosts began the proceedings with Boult and Wagner bowling in tandem. Both these quicks received enough amount of swing and bounce since their very first ball. This made the life of both Proteas opener Cook and Elgar difficult as they found it difficult to lay their bat on the ball. The runs were hard to come and the batsmen weren t able to middle the ball with both the pacers swinging the ball in creating tough situations.

And just when it looked something was about to happen, Cook was trapped by Boult to start the fall of wickets. Cook terribly misjudged the in-swinger thinking the ball would go straight to the wicketkeeper. But the late in-swing did the trick and hit Cook on his pads in front of the middle stump. Kumar Dharmasena, the umpire wasted no time in raising his finger and even the batsman walked back immediately without consulting his partner about a review.

In came Amla with his team struggling at 10 for 1 in 8.5 overs. New Zealand quicks tightened the noose around Amla and Elgar giving no chance to free their arms which made the visitors score at almost 1 Run per over (RPO). Kane Williamson had deployed Boult and Patel from the two ends, who were doing exceptional jobs in putting the South African openers in a spot of bother. But seeing no second success for the hosts, Williamson brought in Wagner changed the complexion of the game within one over. He first got rid of Amla by cleaning his middle-stump. Amla tried to drive the ball without moving his feet at all against a full-length in-swinging delivery. Amla in trying to drive left a big gap between bat and pad from wherein the ball sneaked in to do the rest.

South Africa were reduced to 20 for 2 in 18.2 overs with two top-batsmen departing cheaply with not much runs on the board. Before new batsman Duminy could handle the pressure along with Elgar, Wagner got rid of Duminy just 4 deliveries later.

He banged a short one coming wide of the crease which crammed Duminy for room who tried to pull the ball but withdrew from the shot; eventually getting a glove and the helmet which propelled the ball to Ross Taylor at second slip. Dharmasena gave him out straight away, but Duminy opted for a review only to be wasted!

Since then, skipper du Plessis and Elgar have looked pretty confident enough and this partnership will be very vital for South Africa as a downfall here can put them under pressure since the start if this first Test. 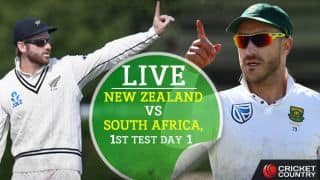 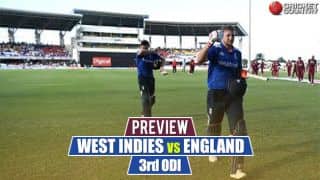