Persistent rain saw the play being called off during the final session.

Due to persistent rain, the fourth day’s play between West Indies and New Zealand was called off.  Only 55.1 overs were bowled in the day with New Zealand making 331 runs for the loss of seven wickets. They now have an overall lead of 307 runs on the board. Kane Williamson is still batting on 161 runs and Mark Craig is giving him company on four. The play will resume half an hour early on Monday.

Earlier, Williamson went past his previous highest score of 135 against Sri Lanka. For the West Indies, Kemar Roach was the most successful bowler. He already has eight wickets to his name in the match. He was the one who broke the partnership between Williamson and BJ Watling by taking Watling’s wicket. It was also his 100th Test wicket for the West Indies. He became the 19th West Indian to do so.  He could have also got Southee’s wicket but for a drop catch. New Zealand then led the West Indies by 290 runs.

Actually, Williamson and Neesham shared a 91-run stand for the fifth wicket at a live 4.29 runs an over. Neesham fell soon after his fifty to Jason Holder. Brendon McCullum was the first wicket to fall on the day for 25 runs to Roach. The morning session on Day Four started half-an-hour early.

New Zealand started the day with their score at 123 for three. Shane Shillingford began proceedings on Day Four for West Indies. Williamson came down the track and lifted one over wide mid-on for the first four of the day. Williamson cut a short and wide delivery from Roach square on the off side for a four. 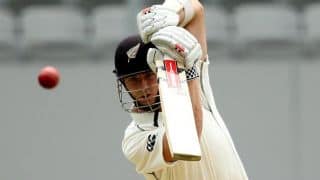 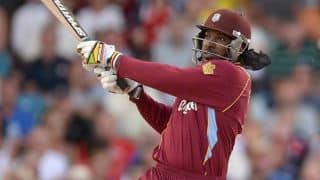