New Zealand posted their biggest winning Test margin when they demolished Zimbabwe by an innings and 301 runs on the third day of their one-off Test at Napier's McLean Park on Saturday. 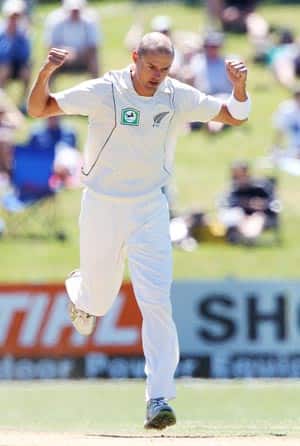 New Zealand posted their biggest winning Test margin when they demolished Zimbabwe by an innings and 301 runs on the third day of their one-off Test at Napier’s McLean Park on Saturday.

After starting the day at 392-5, New Zealand added 103 in 18 overs, giving BJ Watling time to notch his maiden Test century before declaring at 495-7.

Man-of-the-match Chris Martin then lead a bowling attack that routed Zimbabwe twice in the same day — first for the tourists’ lowest Test innings of 51 followed by 143 in their second innings.

The winning margin was seven runs better than New Zealand’s previous record of an innings and 294 runs set in 2005 and also against Zimbabwe.

Martin took two for five off six overs in Zimbabwe’s first innings followed with six for 26 off 8.3 to draw level with Chris Cairns as New Zealand’s third most successful bowlers with a career haul of 218.

The McLean Park wicket held no fears for New Zealand as Watling (102 not out) and his skipper Ross Taylor (122 retired hurt) both scored centuries, with support roles from Brendon McCullum (83) and Martin Guptill (51).

But Zimbabwe, whose previous worst Test score was 54 against South Africa in Cape Town in 2005, could not cope with the seaming deliveries of the four-pronged New Zealand pace attack.

Malcolm Waller’s 23 was the only score in double figures in their disastrous first innings, while Regis Chakabva in only his second Test, managed 63 in the second innings.

Zimbabwe’s one show of resistance was Chakabva’s 63-run second-innings stand with Graeme Cremer (26) for the seventh wicket.

They dealt positively with the best of the New Zealand attack only to be undone in bizarre fashion when part-time spinner Kane Williamson floated a full toss to Cremer which was patted straight to Doug Bracewell at midwicket.

In the tourists’ first innings the New Zealand fast bowlers Martin, Trent Boult, Bracewell and Tim Southee all took two wickets, while Bracewell backed up Martin in the second innings with a further three wickets.

The series continues with the first of three one-day internationals in Dunedin on Friday in which New Zealand will be without captain Taylor who has a torn calf and will be sidelined for at least three weeks.

McCullum has taken over the leadership in the meantime with Taylor expected to be available again when the South Africans arrive in late February. (AFP)

Man of the Match: Chris Martin