New Zealand contained South Africa's vaunted batting line up to set themselves a target of 148 in the first Twenty20 international at Westpac Stadium on Friday. 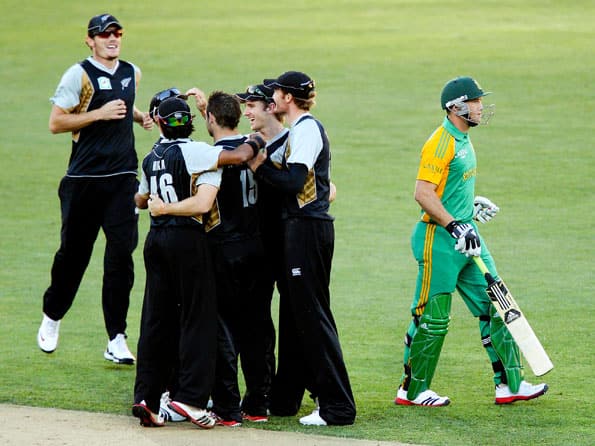 New Zealand contained South Africa’s vaunted batting line up to set themselves a target of 148 in the first Twenty20 international at Westpac Stadium on Friday.

Paceman Tim Southee took three for 28 after New Zealand captain Brendon McCullum’s decision to send South Africa into bat after winning the toss paid early dividends with the tourists finishing the innings at six for 147.

JP Duminy top scored for South Africa with 41, while Justin Ontong, returning to the national team after a three-year absence, hit four successive sixes in his 32 off 17 balls.

New Zealand, coming off a series clean sweep against South Africa, maintained a steady stream of wickets to deny the tourists meaningful partnerships.

Hashim Amla, who had looked threatening, was the first to go after trying to snatch a quick single off a miss-field in the fourth over, only for Martin Guptill to dive in from the field with ball in hand and knock over the stumps.

Colin Ingram departed for a duck in the next over when he charged down the pitch to attack a Nathan McCullum off-break, leaving himself stranded when it slipped past him and into the hands of Brendon McCullum behind the wicket.

Southee then joined the attack, smashing Levi in the helmet with his second ball, then going on to claim the wicket with the last ball of the over when Levi misjudged a slower ball and sent it sailing to Doug Bracewell.

AB de Villiers came to the crease with his side reeling at 38 for three but could only manage eight off 17 balls before being ruled out to a debatable catch and the carnage continued.

New Zealand, their tails up, then restricted Ontong and JP Duminy to just six runs an over through the middle of the innings, forcing the batsmen onto the back foot with aggressive bowling and sharp fielding.

It was the Black Caps’ turn to question the umpire when Ontong appeared to edge the ball to wicketkeeper McCullum, with the umpire ruling the ball hit his body.

The decision proved costly for the home side when Ontong belted four successive sixes off part-time spinner Kane Williamson to add some respectability to South Africa’s score.

But he was dismissed in the next over, caught and bowled by Southee, who just got his fingertips to the ball as he lunged to his right.

South Africa will look for a big performance from Lonwabo Tsotsobe, who took a hat-trick when the tourists won a warm-up match against the Canterbury Wizards earlier this week, to prevent New Zealand overhauling the target.(AFP)