New Zealand celebrated the New Year’s by sweeping the T20I series against West Indies by 2-0. They now thrashed West Indies by 119 runs at Bay Oval in Mount Maunganui. This was also the fourth heaviest defeat for a Full Member Nation. Earlier, England had claimed 116-run win against Afghanistan in Sri Lanka during the 2012 T20 World Cup. With this win, New Zealand are back to the top of T20I rankings toppling Pakistan. Colin Munro starred for New Zealand becoming the first batsman with three T20I centuries. New Zealand bowlers defended the total well bundling out West Indies for 124 within 16.3 overs. Tim Southee lead the pace attack with figures 3 for 21 while Trent Boult and Ish Sodhi shared 4 wickets between them.

West Indies were far from competitive throughout the tour losing 2 Tests, 3 ODIs and 3 T20Is. West Indies’ poor starts continued to haunt them. Southee struck twice in his opening spell that included the wicket of Chris Gayle. Southee’s short ball got the better of Gayle who was caught by Glenn Phillips behind the stumps for a duck. Chadwick Walton chipped the ball to the covers landing to Munro. He was gone for a duck as well. Rovman Powell was promoted to No.4 to cover up for Shai Hope who had damaged a ligament in his right shoulder while fielding. New Zealand bowlers could not capitalise on their first over with Boult leaking 17 runs in his first over that included back-to-back no balls. Southee then went on to concede 19 runs. Andre Fletcher and Powell took charge of the shots.

Kane Williamson introduced spin early on and Anaru Kitchen was called into action. His bowling provided a breakthrough and dismissed Powell for 16. New batsman Shimron Hetmyer began brightly with a six in Mitchell Santner’s over. However, he was run-out minutes later for 7. An unfazed Fletcher continued to blaze with the big shots and managed to add 24 runs. However, introduction of Sodhi came as a breather for New Zealand.

Sodhi ended Fletcher’s chapter for 46 and the collapse began. Following the dismissals of Carlos Brathwaite and debutant Rayad Emrit, Jerome Taylor tried to steady the ship, before he was departed for 4-ball 13. With Hope unable to come to bat, Samuel Badree’s wicket meant West Indies defeat.

Earlier, Munro was in majestic form as he blasted away at the top of the New Zealand innings. He faced 53 balls, smacking 10 sixes and three fours. With previous centuries against India and Bangladesh, he moved ahead Gayle, Brendon McCullum, Evin Lewis and Rohit Sharma, the ones with 2 T20I centuries. Munro and Martin Guptill gave New Zealand a flying start to their innings with a century partnership, which was the 10th highest partnership in T20Is.

It was a timely return to form for Guptill with 63 off 38 balls after struggling against the West Indies earlier in the series. Emrit made his debut count by breaking the opening partnership between Munro and Guptill. New Zealand will now begin their limited-overs series against Pakistan from January 6.

Man of the Match: Colin Munro

Man of the Series: Colin Munro 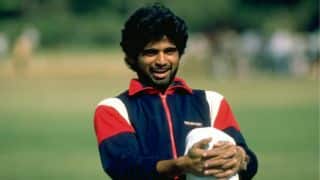