New Zealand will take on Australia in the first One-Day International (ODI) of their three-match series, starting on Wednesday.

New Zealand will take on Australia in the first One-Day International (ODI) of their three-match series, starting on Wednesday at the Eden Park in Auckland. The three-match Chappell-Hadlee Trophy 2015-16 ODI series will be followed by the three-match Test series, for the Trans-Tasman Trophy 2015-16. The second and the third ODIs will be played at Wellington and Hamilton on February 6 and 8 respectively. The tour does not consist of any tour match, as the Australians are coming off a busy summer that concluded with a three-match Twenty20 (T20I) series against India, in which they were blanked by their opponents. LIVE CRICKET SCORECARD AND UPDATES: New Zealand vs Australia 2015-16, 1st ODI at Auckland

New Zealand will hope to provide a fitting farewell to their outgoing captain Brendon McCullum, who is playing in his final series. The ODIs and Tests against Australia will be the last time McCullum will be playing for New Zealand, and Kane Williamson is likely to take charge of leadership, starting with the ICC World T20 2016. Live Cricket Score, New Zealand vs Australia 2015-16, 1st ODI at Auckland

Australia will be back to full strength after resting their key players as much as they can during the series against India. But they will be without the services of Aaron Finch and Mitchell Starc, who are nursing injuries. Josh Hazlewood will be leading the bowling attack once again.

Australia have already announced their playing XI for the match, and by not selecting Usman Khawaja they have invited some criticism. Khawaja has been in terrific form of late and his absence will only hurt the Australians. Left-handed batsman Shaun Marsh was selected ahead of Khawaja. 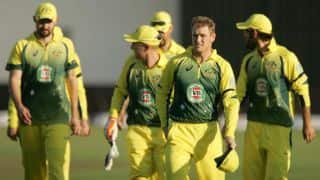