If Williamson is ruled out, Will Young will make his Test debut at Hagley Oval.

Kane Williamson is in doubt for the third Test against Bangladesh later this week after an MRI scan Tuesday confirmed a grade one tear to his left pectoral minor muscle.

The New Zealand skipper had injured his shoulder while fielding on day three of the second Test at the Basin Reserve and experienced pain while batting the next day.

Gary Stead, New Zealand’s coach, told reporters after the team’s innings win today that Williamson will travel with the squad to Christchurch where he will be assessed ahead of the final Test starting on Saturday at Hagley Oval. (READ: Neil Wagner bounces out Bangladesh as New Zealand take series)

Kane is obviously keen to play this final game, but we ll look to take a safety-first approach, particularly with the World Cup on the horizon, said Stead.

In the eventuality that Williamson is not passed fit, the uncapped batsman Will Young would likely get the nod.

Will has been in our Test squad as batting cover for the past two series and he should be confident following some strong performances domestically and for New Zealand A,” said Stead.

The wicketkeeper BJ Watling did not take the field at Basin Reserve on day five after hurting himself while warming-up before play.

BJ has a minor left hamstring strain and we felt it was best he didn t keep today to give him the best chance of being fit for the third Test,” said Stead. 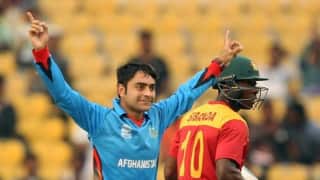 Afghanistan’s proposed tour of Zimbabwe called off over broadcasting costs