Even though Mushfiqur took part in the training, it will require a miraculous effort from him to be fit for the second Test.

Bangladesh are likely to be without Mushfiqur Rahim for the second Test against New Zealand in Wellington after the wicketkeeper batsmen was confirmed to have not attained fitness for the second match of the series. Mushfiqur, who missed the first Test in Hamilton due to an injury sustained to his wrist, is said to have picked up a side strain as well.

Steve Rhodes, Bangladesh’s head coach pointed out that even though Mushfiqur took part in the training, it will require a miraculous effort from him to be fit for the second Test starting Friday. That said, Rhodes was optimistic of Mushfiqur getting match fit for the third Test in Christchurch. (READ: Walsh calls for patience and need to invest on young Bangladesh pacers)

“Situation with Mushy is he is trying his best to be fit as quickly as possible for the Test matches. Today was his first real hit with the tennis ball and rubber ball and finished with some cricket ball work. When he got to (playing with) the cricket ball, there was still a little bit of soreness in that ligament area, so it means he will be extremely doubtful for the second Test,” Rhodes told reporters. (READ: Bangladesh can expect bouncer barrage on flat Basin Reserve track – Boult)

“It will take an amazing recovery overnight but we all hold out hope all the time for Mushy. The good news is that he is on course for the third Test.”

With Shakib Al Hasan already injured, and Mushfiqur adding to the list, Bangladesh are already handicapped. There were also concerns regarding Tamim Iqbal, who is said to be suffering from a few niggles, but Rhodes was confident of the opener being ready to get going.

“Tamim had a light workout today; just a little bit soar but nothing major. He is in a good spot, scored over 200 runs (in the Hamilton Test) He [Tamim] is okay and the rest of the boys are fine, so there is no little drama in that respect,” Rhodes said.

As Bangladesh seek their first win in New Zealand and aim to level the series following an innings defeat in Hamilton, they require better performances from their fast bowlers and for the batsmen to put up a good score in the first innings. Bangladesh were bowled out in the first innings for 234, and despite putting up a fight in second innings through centuries from Soumya Sarkar and Mahmudullah, it was not enough to trouble New Zealand, who had posted their highest-ever Test score of 715 for 6 declared.

“What was pleasing in the last game was to see Soumya coming out and doing so well because in many ways he was a back-up batsman along with Liton,” Rhodes said. 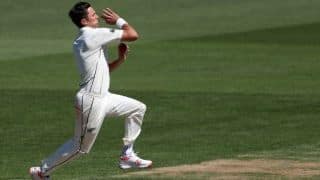