Tamim Iqbal defied a green wicket with an unbeaten 72 as Bangladesh reached 127 for three at lunch against New Zealand.

Tamim Iqbal defied a green wicket with an unbeaten 72 as Bangladesh reached 127 for three at lunch against New Zealand after the rain-affected second Test finally began on day three in Wellington.

After the first two days were washed out, New Zealand skipper Kane Williamson was relieved to win the toss and bowl first with grey skies, an emerald wicket and a damp outfield, but the hosts found wickets hard to come by.

Tamim led a strong start for Bangladesh with Shadman Islam until Neil Wagner engineered a late collapse at the end of the session. New Zealand’s new-ball pair Trent Boult and Tim Southee were batted out of the attack after 10 overs as Tamim and Shadman forged a 75-run opening stand before Colin de Grandhomme made the breakthrough with Shadman, on 27, caught by Ross Taylor at first slip.

Bangladesh enjoyed a fifty opening stand for the third successive innings, a feat last achieved in New Zealand by South Africans Herschelle Gibbs and Gary Kirsten in 1999. The New Zealand bowlers, who appeared to struggle at times with their footing on the damp surface, were unable to generate significant swing and Tamim read the movement off the wicket with precision.

He brought up is 27th Test fifty steering a Matt Henry delivery to backward point for a single and by lunch he had hit 10 fours in his 109-ball innings. He added 44 for the second wicket with Mominul Haque who contributed 15 before he was caught down the leg side fending at a Wagner ball angling towards his rib cage.

Wagner then had Mohammad Mithun caught behind for three with the last ball before lunch. Both sides dropped their spinners for this Test with New Zealand bringing in Matt Henry while Bangladesh included Mustafizur Rahman and Taijul Islam. 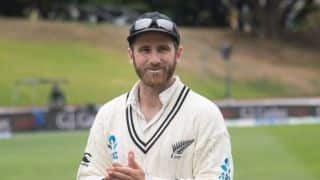