Mark Wood: I got to 20 and thought I'm like Don Bradman

Mark Wood: I got to 20 and thought I'm like Don Bradman

Mark Wood, who slammed his maiden Test fifty, spoke about the fun batting alongside Jonny Bairstow.

England may have been on the ropes but Mark Wood was having the time of his life as he and Jonny Bairstow regained momentum on day one of the second Test against New Zealand on Friday.

The pair came together with England at 164 for seven and by stumps at Hagley Oval in Christchurch they were 290 for eight.

Bairstow was 97 not out, in sight of his fifth Test century, while Wood was out for a career-best 52 after the pair put on 95 for the eighth wicket.

“When I went out to bat obviously we were in a bit of trouble,” Wood said.

“Jonny knows that (and said) ‘I’ll let you have fun and a bit of crack’ and it made it easier and we were just seeing how it goes and having a laugh.”

“I get to 20 and think I’m like Bradman. I think I tried too many shots. It was nice having Jonny there because he kept it fun and kept us calm.”

From a position of strength, New Zealand conceded that by stumps the honours were even.

“Obviously that partnership was crucial for them,” said Tim Southee, New Zealand’s chief destroyer with five for 60.

“It’s pretty even, I think. It would have been nice to finish them off today but hopefully we can come back tomorrow and knock those last two off.”

Southee and Trent Boult did all the damage for New Zealand taking all eight wickets with Boult having three for 79 after New Zealand won the toss and elected to bowl first.

After being comprehensively beaten in the first Test, England strengthened their batting line up for Christchurch with the addition of James Vince while Wood and Jack Leach came in for bowlers Chris Woakes, Craig Overton and Moeen Ali.

But apart from Wood and Bairstow there was little to enthuse about for England who were in danger of folding for under 200 until the eighth wicket partnership.

Bairstow’s 97 off 154 balls included partnerships of 56 with Ben Stokes, 13 with Stuart Broad, the sparkling 95 with Wood and 41 with Leach who was not out 10 at the end of the day.

On 58, Bairstow suffered a fearful blow to the side of the head from Colin de Grandhomme which knocked his helmet from his head but did nothing to slow his run flow.

Boult and Southee took their wickets in clumps starting with Alastair Cook (two) and James Vince (18) to have England at two for 38.

When play resumed after lunch they accounted for Joe Root (37), Dawid Malan (duck) and Mark Stoneman (35) in a nine-ball burst.

Following the tea break, Stokes went for 25 and Broad for five before the Bairstow and Wood partnership. 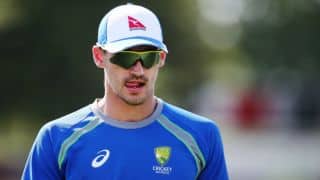 IPL 2018: Mitchell Starc ruled out due to stress fracture 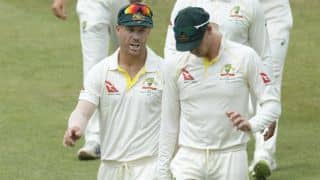 Mickey Arthur: Steven Smith will come back stronger, not sure about David Warner