The left-handed opener brought up his 11th Test century off 159 balls in style against England with a fluent boundary at Seddon Park on Friday.

A brilliant century from opener Tom Latham helped New Zealand take charge on a rain-curtailed opening day of the second and final Test against England at the Seddon Park, Hamilton on Friday. At the stumps on Day 1, the hosts were 173/3, having Latham and Henry Nicholls at the crease on 101 and 5 respectively. Only three deliveries could be bowled in the final session of the day before the rain arrived to play spoilsport and no further play was possible.

Earlier, England skipper Joe Root won the toss and elected to bowl. His decision proved right instantly as the hosts lost Jeet Raval in the seventh over, with the team’s total of 16. Williamson, who came in next, also couldn’t stay long and was caught at slips by his England counterpart off the bowling of Chris Woakes.

The New Zealand opener brings up his 11th Test century off 159 balls in style with a fluent four at Seddon Park.

However, Ross Taylor used all his experience and batted with patience to take New Zealand out of hot waters. Both Taylor and Latham played cautiously and played the balls on their merit.

The duo stitched a 116-run stand for the third wicket before Taylor, just after reaching his half-century, became the second scalp of Woakes before the end of the second session.

The lack of movement on the Seddon Park strip didn’t assist much to the England pacers who struggled to find the right line. Sam Curran, Jofra Archer, Ben Stokes and experienced Stuart Broad faltered in finding the right line and paid the price.

Nicholls, who came in next, then joined Latham who looked comfortable right from the start and scored his 11th Test hundred.

Both took New Zealand to Tea break without any further damage.

In the last session, only three balls were bowled by Jofra Archer before rain came and stayed long enough to force the umpires call for an early stump. 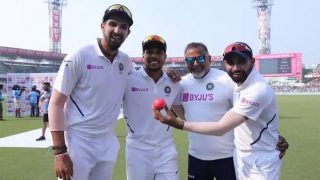 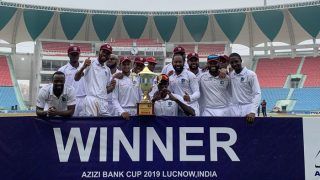