New Zealand and England will lock horns for a place in the tournament final in the sixth T20I at Hamilton.

New Zealand bowling was steamrolled by Australia at Eden Park on Friday as they went on to register the highest T20I chase. Not often it happens that you score a hundred in the T20 format and end up in a losing side but that is what happened with Martin Guptill, who slammed a 49-ball century and became the highest run-getter in T20Is. Australia chased down 243 with seven balls to spare. New Zealand, surely, will look to put forward a better bowling show against an explosive England batting line-up.

New Zealand and England will lock horns for a place in the tournament final in the sixth T20I at Hamilton. The live streaming will be available on HotStar, while you can watch it on television on Star Sports Select 1. The matches can also be watched at SkySports.

New Zealand have managed one win out of their three games thus far, whereas England are yet to win a game this tournament. England still have a chance to make it to the final by winning this one by a comfortable margin. Beating New Zealand at home isn t going to be an easy ask. 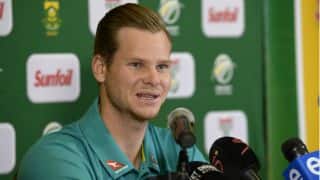