The Christchurch wicket is expected to be a fair one, assisting both the sides. It is expected to provide considerable assistance to the bowlers on first three mornings before becoming better for batting as the Test progresses.

Fresh from the scars of a 3-0 drubbing in Tests against India and loss in the subsequent One-Day International (ODI) series, New Zealand were hoping to revive their fortunes in the familiar territory, on home turf. Up against the mercurial Pakistan, which has never lost a Test series in New Zealand since 1985, the task for the hosts was a cut out one. Their campaign however, faced a setback on Day One of the first Test; not from the opponents, but from rain, which kept playing hide and seek all day and resulted in the day s play being washed out without a single ball being bowled. FULL CRICKET SCORECARD: New Zealand vs Pakistan, 1st Test at Christchurch.

As a matter of fact, even the toss could not take place as it kept drizzling intermittently all day long. Christchurch, the host city for the first Test, was in news for an earthquake of 7.8 magnitude few days back. There were doubts regarding the hosting of the game. However, the match did get affected, but not due to the quake. Rain played spoilsport and deprived the cricketers as well as fans of cricket action on Day One. Not only the hosts, the visitors too were keen to get out in the middle and have some fun. But both the teams will now have to start afresh on Day Two. LIVE BLOG, DAY 1: PAKISTAN vs NEW ZEALAND, 1st TEST AT CHRISTCHURCH.

After declaring lunch at 1:00 pm local time and tea at 4:00 pm local time, decision taken after due inspection, umpires S Ravi and Ian Gould called off the play just after the scheduled tea time. The two wise men also announced that in order to compensate for the loss, the match will begin half an hour before the scheduled time tomorrow, that is at 10:30 am local time and toss will happen at 10:00 am local time. The two teams will look to get at least 98 overs being bowled each day next four days so as to compensate for the time lost.

The forecast for Day Two is also not very encouraging, with intermittent showers being predicted. However, the forecast for the remaining days is good with rains hopefully staying away from the Hagley Oval and allowing some action.

Pakistan are yet to play a delivery on this tour, with their three-day practice match against New Zealand A in Nelson also getting washed out. It will be interesting to see how well they cope up with the conditions. They, however, have a settled unit unlike New Zealand. Their batting and bowling departments look more or less sorted with no major headache. Thankfully, there are no injury scares too. The team is also coming on the back of a drawn series in tough English conditions and 2-1 win over West Indies in UAE. This means Pakistan are well placed before the start of this series and are oozing confidence.

New Zealand, on the other hand, are struggling with form and combination issues ahead of the series. They have made plenty of changes for the series; axing the out of form opener Martin Guptill and replacing him with Jeet Raval being the prominent one. The other players New Zealand have dropped from the squad for India Tests besides Guptill are Doug Bracewell, Jeetan Patel (who was called mid-way from English County season), under-fire wicketkeeper Luke Ronchi, leg-spinner Ish Sodhi and injured off-spinner Mark Craig. Spinning all-rounder Mitchell Santner has a fractured wrist and hence was not available for selection.

The Christchurch wicket is expected to be a fair one, assisting both the sides. It is expected to provide considerable assistance to the bowlers on first three mornings before becoming better for batting as the Test progresses. The presence of rain though might tilt things a bit in favour of the bowlers. 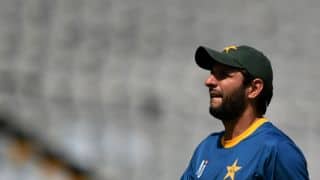