New Zealand take on Pakistan in the second and final Test of series at the Seddon Park in Hamilton. They had comprehensively beaten the visitors in the first Test at Christchurch by 8 wickets and are thus 1-0 up in the two-match series. This places them with a great chance to beat Pakistan at home; something which they have failed to do since 1985. Pakistan have won 7 and drawn 5 Test series in last 31 years in New Zealand, thus making it a 12-series unbeaten streak for them. The live cricket streaming of the match is available for free on skysport.co.nz, while the live telecast of the match is available in New Zealand on Sky Sports. Pakistani viewers can catch the action on Ten Sports, Geo Sports and PTV Sports. LIVE CRICKET SCORECARD: Pakistan vs New Zealand, 2nd Test at Seddon Park, Hamilton.

The first Test was a one-sided affair, with New Zealand winning it inside two and a half days. Interestingly, the first day s play was washed out due to rain and a result in four days seemed a bit difficult. But some extraordinary stuff being dished out by the bowlers saw the match getting over in just over seven sessions. Pakistan could not cross 200 run-mark even once and paid the price for it by losing the match.

For New Zealand, apart from the regular bowlers Tim Southee, Trent Boult and Neil Wagner, the heroes of the match were debutants all-rounder Colin de Grandhomme and opener Jeet Raval. De Granhomme picked up a six-for in the first innings and then took another wicket in the second to finish with seven wickets on debut. Besides, he scored 29 in the only chance he got to bat. That was an important innings in the context of the match. He was adjudged as the Man-of-The-Match for his effort. Raval, on the other hand, scored a fifty (55) and 36 not out in the match to seal the deal for the hosts.

Nothing, simply nothing went right for the tourists in the first Test. The second Test too is not going to be easy. Their skipper Misbah-ul-Haq has returned to his country after the death of his father-in-law. Besides, Misbah was also banned for a Test for slow over-rate. That punishment shall be applicable to this Test, which means Misbah shall be available for the first Test against Australia next month. In his absence, Azhar Ali shall lead the Pakistani side in the second Test. In other news, Trent Boult has been ruled out of the second Test after an injury. He has been replaced by Doug Bracewell. Also all-rounder Mitchell Santner has made a return to the squad after recovering from wrist fracture. 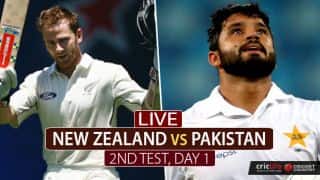