Daniel Vettori was bowled by JP Duminy to leave NZ reeling at 95/7.

New Zealand were facing doldrums during their chase of the 283-run target set by South Africa as they lost their seventh wicket with just 95 runs on the board with the dismissal of Daniel Vettori for 1 at Bay Oval in Mount Maunganui. Vettori attempted to sweep across the line and missed the ball completely, which went on to disturb the stumps and give JP Duminy his maiden wicket of the match.

South Africa reached a commanding total of 282 for the loss of nine wickets at the end of their quota of 50 overs during the second One-Day International (ODI) against New Zealand at Bay Oval in Mount Maunganui. Imran Tahir and Morne Morkel were unbeaten without scoring a run at the end of the South African innings. Hashim Amla top-scored for South Africa with a fluent 119 from 135 balls, while Corey Anderson emerged the pick of the bowlers with figures of two for 30.

New Zealand won the toss and elected to field first. The Kiwis made two changes in their playing XI, namely Tim Southee and Mitchell McClenaghan in place of Kyle Mills and Nathan McCullum. South Africa opted to replace Ryan McLaren with batsman David Miller. The Proteas thus had limited options in the bowling attack and had to utilise a part-time bowler. 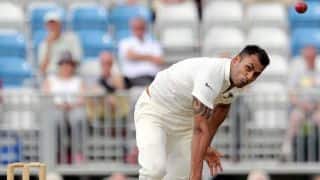