Chris Morris, has played only two Tests for South Africa.

South Africa, who are currently engaged in a three-Test series against New Zealand, have released all-rounder Chris Morris from the squad. Morris, will be heading back to South Africa, leaving the tourist with five-specialist fast bowlers. Wayne Parnell and Duanne Olivier are the only ones remaining on the bench with Vernon Philander, Morne Morkel and Kagiso Rabada playing the second Test at Wellington. South Africa as a back-up has called in off-spinner Dane Piedt, who will join the team later in the week. Morris, has played only two Tests for South Africa, will now have to wait till July to get another shot at a national cap, when South Africa travel to England. FULL CRICKET SCORECARD, New Zealand vs South Africa, 2nd Test at Basin Reserve, Wellington

Earlier, South Africa won the toss and elected to bowl in the second Test at the Basin Reserve in Wellington. The Proteas kept the same line-up that played in the drawn first Test in Dunedin while injuries to Ross Taylor and Trent Boult have forced an understrength New Zealand to make several changes. “There’s probably a bit in (the pitch) early. But it’s usually a good surface,” South African captain Faf du Plessis said with the wicket showing a green tinge.

To compensate for the loss of Taylor, who has been replaced by Neil Broom, and with Jeetan Patel preferred as the sole spinner, New Zealand have included all-rounder Colin de Grandhomme to prop up their batting stocks. This has meant going into a Test with only two frontline seamers. Tim Southee, who missed the Dunedin Test, returns to join Neil Wagner. 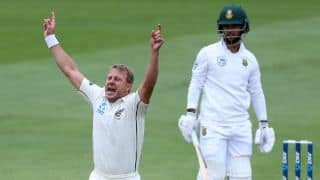 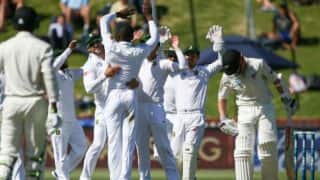