The third Test between New Zealand and South Africa will begin from March 24 at Hamilton.

After winning the second Test of the three-match series versus New Zealand, South Africa‘s off spinner Dane Piedt stated that Kiwis should have relied on seam-friendly tracks and backed their pacers. Keshav Maharaj’s 6-for earned them a memorable 8-wicket win, as Proteas took 1-0 lead in the series. The last Test will be played at Hamilton, which will be a do-or-die encounter for the hosts in order to level the series. Piedt, who was added to the squad ahead of the last match, will hope to be a part of the next tie and give valuable support to Maharaj. ALSO: Taylor ruled out of Hamilton Test; Boult likely to play

According to Cricbuzz, Piedt also observed that the curators had prepared seam-friendly tracks when Pakistan and Bangladesh toured New Zealand earlier in the season. “I think they have shot themselves in the foot. They didn’t back their seamers to do the job, and I thought their seamers bowled pretty well in South Africa. They bowled us out for 263 in Durban on quite a sporting deck”, he said on Monday.

“I didn’t expect that New Zealand would play two spinners in the first Test and when they left Tim Southee out I was also surprised. Just the fact that two series before that, Bangladesh and Pakistan were here and they played on surfaces that were quite sporting for the seamers. I expected it to be the same, but obviously with the type of seam attack we have they thought they would be under pressure”, added Piedt.

Piedt also complimented Maharaj for his 20.2-7-40-6 in the second Test at Wellington. The left-arm spinner led his side’s revival, after a 91-run lead, to run through New Zealand’s line-up in the second essay.

“He’s shown that he’s in unbelievable form and he’s done that in domestic cricket so I can only be happy for him. I spoke to him last night and I told him how impressive it’s been to watch him bowl on the international stage. It’s never hard feelings. It’s about spin bowlers coming through and being able to show their skill to the rest of the world,” Piedt observed.

The third Test will begin from March 24 at Hamilton. The track is known to be spin-friendly with former New Zealand skipper, Daniel Vettori, claiming 39 wickets at the venue.

“The history would suggest that this season, in particular, it has turned up there. If you’re asking if we’ve ordered the pitch to turn, no we haven’t. The reality is that that’s the way it has been panning out in Hamilton and we’ve picked our team accordingly, similar to Dunedin where we thought it would be dry”, concluded Peidt. 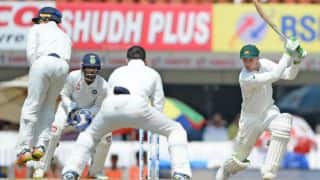 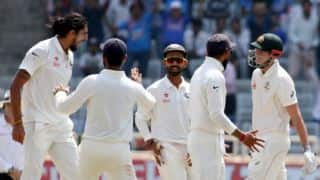