Piling on a twin half-centuries from skipper, Brendon McCullum and Kane Williamson, New Zealand posted a mammoth total of 331 against South Africa in 10th warm-up tie of the ICC Cricket World Cup 2015 at the Hagley Oval in Christchurch. Williamson was the highest scorer with 66 runs. Catch the live blog of the match here

Earlier, McCullum won the toss and elected to bat first. The Kiwis were off to a good start as the opening batsmen Martin Guptill and McCullum put up the opening 50-run stand before Guptill, who had scored a century in the last warm-up tie against Zimbabwe, departed for 26 after being dismissed by Wayne Parnell. However, out came Williamson and both put up a healthy 70-run stand for the second wicket, before McCullum fell for 58 to Aaron Phangiso as the score read 127. ICC Cricket World Cup 2015: SCHEDULE & MATCH DETAILS

Out came then, one off New Zealand’s explosive batsman, Ross Taylor and supported Williamson in putting up another 53-run stand for the third wicket and at the score of 180, it was Williamson, who fell for 66 to Vernon Philander. Following his dismissal, Taylor was the next to go with just 40 more added to the total. ICC Cricket World Cup 2015: POINTS TABLE

Following Taylor’s dismissal, there were hardly any solid partnership and were mostly scattered, but the incoming batsmen played a mild role in building small partnerships as New Zealand finished on the score of 331 after 50 overs. For South Africa, Philander, Kyle Abbott and Parnell impressed with a couple of wickets for 59, 35 and 52, respectively. 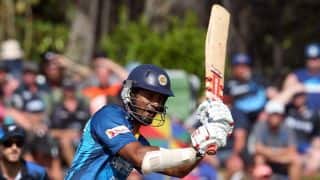