His last century came in November last year against India at Hyderabad when he scored 118.

Sri Lanka batsman, Mahela Jayawardene scored his 18th half-century in ODIs against New Zealand during the first of the seven-match ODI series at the Hagley Oval in Chrsitchurch on Sunday. His century came off 104 deliveries including 10 boundaries and a six with a strike rate of 96.15.

His last century came in November last year against India at Hyderabad when he scored 118. Currently, he is batting along with his partner, Jeevan Mendis who is batting on 22 off 22 as Sri Lanka’s score reads 196 for the loss of five after winning the toss and electing to bat first. This would also be his first half-century of the year in his first match of the year. 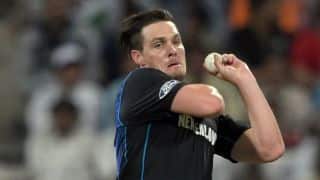