A fascinating finish is in prospect for Sri Lanka in their three-day tour fixture against a New Zealand XI at Napier’s McLean Park.

At stumps on the second day, Sri Lanka were 160/2, holding an overall lead of 100. The NZ XI had a decent day’s work.Resuming at 67/4, replying to Sri Lanka’s first innings 210/9, a solid partnership between Sandeep Patel and Michael Snedden of 62 for the fifth wicket put some substance into the innings

Patel and Katene Clarke then put on a further 54 for the sixth wicket and to cap it off an unbroken ninth-wicket stand between captain Peter Younghusband and Max Chu of 48 enabled the inexperienced NZ XI to declare at 270/9, a 60-run lead over the international tourists.

Patel top-scored with 69 while there were unbeaten thirties for Younghusband and wicketkeeper Chu.

Sri Lanka worked their way through eight bowlers during their 82 overs in the field. The wickets were shared around and Sri Lanka, preparing for the first Test against the Black Caps in Wellington starting on Saturday, would have got value out of the workout as they look to settle on their Test attack.

Sri Lanka’s first four batsmen are all test players and left-handed opening pair Danushka Gunathilaka and Lahiru Thirimanne shared a 116-run partnership in 21.2 overs. They smartly wiped out the deficit, then laid a platform for Sri Lanka to press on and set a final-day target. Gunathilaka struck 83 off 77 balls before being caught at long on off legspinner Younghusband, while Thirimanne was caught behind for 45.

The unbeaten pair, Dhananjaya de Silva and Kusal Mendis, share nine Test centuries between them. Add in the prospect of first-innings century maker Angelo Mathews to follow, and there should be some entertaining target-setting batting through the first half of the final day. 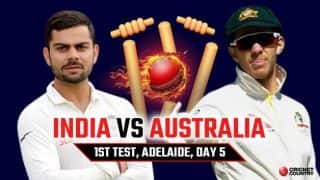 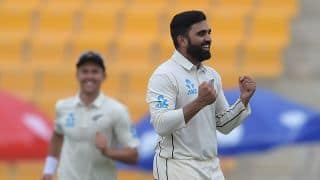