This is Latham's first Test century since January 2017; he helped fashioned three vitals stands on day two in Wellington.

The New Zealand opener Tom Latham on Sunday scored his seventh Test hundred to steer the home team to 311/2 in reply to Sri Lanka’s 282, and at the end of the second day’s play at the Basin Reserve he happily thanked his skipper for getting him into top gear.

Kane Williamson dominated a second-wicket partnership of 162 with 91 off 93 balls, out-scoring Latham who contributed 67 in that stand. Williamson’s aggressive innings allowed Latham to convert a watchful start – Jeet Raval made 43 of the 59-run opening stand – into an innings of substance, which he thanked him for.

“At the start of my innings, I wasn’t playing that quickly, but the way Jeet Raval played and the way Kane came and played – that took the game to the opposition and kept the scoreboard ticking over,” Latham said after stumps. “It was good for me. I could just keep going. The most important thing we talk about was making those partnerships big ones, and I managed to get a good one with Kane.”

Williamson narrowly missed his 20th Test hundred when he was out sweeping, but that alliance with Latham topped the scales in New Zealand’s favour. Latham reached 121 off 256 balls – a strike-rate of 47 – and with Ross Taylor (508) he has added 90.

“Kane came out and hit the ball fantastically well – I guess he’s a world-class player and is hitting the ball unbelievably well in all conditions,” said Latham. “You look at some of the shots he plays – from ball one – those early boundaries set the tempo for his innings and he kept doing that. He’s a fantastic player and one to get a few more tips off. When guys are going like that it’s almost easier to give them the strike and let them do their thing.”

For Latham, this is a welcome hundred. He managed two fifties in his previous nine innings and had not managed a century since January 2017. During the 2-1 series win against Pakistan in the UAE recently, Latham averaged 16.5 with a solitary half-century.

“The slow start was about trying to get them to bowl to me as much as possible. Coming from the UAE where the conditions were a lot different, it was important for me to try and wait to score when the ball was a lot straighter, or when it was shorter or fuller,” he said.

“I didn’t have the results I wanted in the UAE, but I felt like I was hitting the ball alright. The biggest thing was the trust in my own game, and the trust that I can do it at this level. It’s been a while since I made a big score, but it was nice that I managed to do that straightaway.” 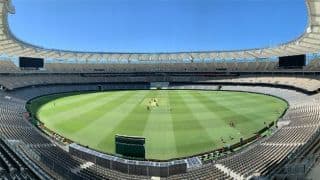