This is the second-highest score for a New Zealand Test opener, after Bryan Young's 267*.

Tom Latham cut an exhausted figure after a historic day at Wellington’s iconic Basin Reserve, where he etched his name in New Zealand cricket history books by battling his way to a monumental unbeaten 264 off 489 balls against  Sri Lanka.

Latham is the fourth New Zealand opener to carry his bat through a completed Test innings, and came within one scoring shot of surpassing Young. He was left three runs short of matching the former opener’s 267* when the last man Trent Boult was dismissed to bring to a close New Zealand’s innings on 578.

“Pretty excited and pretty proud,” said Latham afterwards. “A great day that I probably thought would never happen. Really nice to be sitting here with those sort of numbers against your name.

“A little bit tired but the adrenaline is still running through me. The best thing is you get a break every two hours. It’s important to get to certain stages of the game, whether that’s lunch or tea. The boys coming in managed to keep me going and kept me inside my gameplan which was probably the most pleasing.”

Latham crossed 250 with a pull shot for two, and in the next over hit Dilruwan Perera for a four and six to move to 263. He added one more run before Boult was dismissed when he mistimed a slog.

“Looking back in years to come that’s something I might think about but you don’t play the game for those sort of things. Down the line it’ll be something pretty cool,” said Latham. 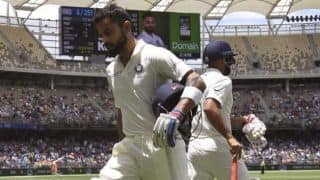 IPL 2019 auction: All you should know