Sri Lanka's Kusal Mendis posted his eighth Test 50 as he battled with captain Dinesh Chandimal to save the second Test against New Zealand on day four in Christchurch Saturday.

Sri Lanka‘s Kusal Mendis posted his eighth Test 50 as he battled with captain Dinesh Chandimal to save the second Test against New Zealand on day four in Christchurch Saturday.

After resuming the day at 24 for two, Sri Lanka were 89 for two at lunch with Mendis on 51 and Chandimal on 33.

With time more important than runs for Sri Lanka, the pair put on 65 as they batted through the morning session.

New Zealand bowling spearheads Trent Boult and Tim Southee continued to extract movement with the ball, but the batsmen were rarely troubled.

Boult was hopeful with a delivery before lunch that smacked into Mendis’ pads, when the batsman was on 42, but the ball had found a faint inside edge.

With victory improbable for Sri Lanka, as they need a further 571 to reach their 660 target, the best they can hope for is to bat through the remaining five sessions to square the series following the drawn first Test in Wellington.

To win would require a record performance with the highest Test fourth innings being 654 for five by England against South Africa in 1939.

The highest winning fourth innings is the West Indies’ 418 for seven against Australia 15 years ago in Antigua.

Sri Lanka’s senior batsmen have shown their ability to bat for long periods.

Chandimal has 11 centuries to his name, Mendis has six and the next batsman in Angelo Mathews has nine.

In the Wellington Test last week, Mendis and Mathews became the first pair to bat through a full day of a Test in New Zealand with an unbroken second innings partnership worth 274 in 109 overs. 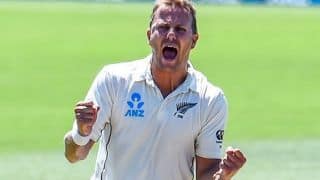