West Indies are chasing their first ODI series victory in New Zealand since 1995.

West Indies are chasing their first ODI series victory in New Zealand since 1995. The wait seems to be longer. West Indies were restricted to 248 for 9 in the first ODI at Whangarei. New Zealand chased it down with 5 wickets in hand and 4 overs to spare. The chief architect of New Zealand’s win was Doug Bracewell who marked his international comeback by dismissing the in-form Chris Gayle off the first ball. Bracewell finished with a four-for. Debutant leg-spinner Todd Astle picked 3. West Indies skipper Jason Holder rued the team’s batting performance in the post-match conference.

“It was tough, I didn’t think we had enough runs. We kept losing wickets at crucial stages of the game and never really gathered momentum. That obviously hampered us today and we’ve just got to correct it.”

The bright spots in West Indies’ batting were the gutsy fifties from Evin Lewis and Rovman Powell. For New Zealand Bracewell came back to the side after a 15-month. Earlier this year he was convicted of drink-driving. He was the last-minute replacement for Colin de Grandhomme after the latter ruled himself out following his father’s death.

Kane Williamson was in all praises for his pacer.

“For him to come back and perform the way he did, taking some big scalps for us, was outstanding,” said Williamson.

New Zealand opening batsmen George Worker and Colin Munro laid the foundation for the hosts’ chase with a 108-run partnership. Worker finished on 57 and Munro 49 as New Zealand’s top order all made starts, with Williamson contributing 38 and Ross Taylor remaining unbeaten on 49.

The next fixture of the three-match ODI series is in Christchurch on Saturday. Williamson and pacer Tim Southee will be rested for the remaining games. 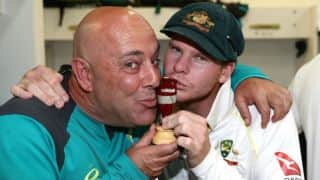