West Indies and New Zealand begin their three-Test series on Tuesday in Dunedin with an aim to improve their ratings points on the Reliance International Cricket Council (ICC) Test Team Rankings Table.

West Indies and New Zealand begin their three-Test series on Tuesday in Dunedin with an aim to improve their ratings points on the Reliance International Cricket Council (ICC) Test Team Rankings Table.

Despite the results there will be no change in West Indies’ final position on the table, except to reduce the gap with Australia.

If New Zealand was to win the series by a margin of 2-0, it can rise up to 82 ratings points, while a 3-0 series sweep will hand the home team a rise of eight ratings points to thereby finish at 83, according to the ICC.

In both scenarios (New Zealand winning 2-0 and 3-0), West Indies will move down to seventh place behind Sri Lanka.

For the West Indies, the series offers an opportunity to reduce the gap with fifth-ranked Australia. But this can only happen if it wins the series by either a 2-0 or 3-0 margin.

With the top four sides as of December 31, 2016 qualifying for the inaugural ICC World Test Championship scheduled for 2017, every Test counts towards the qualification.

Meanwhile, Shivnarine Chanderpaul starts the series as the highest-ranked batsman on either side in second position on the Reliance ICC Player Rankings for Test batsmen.

Chanderpaul trails No 1 ranked AB de Villiers by 11 ratings points and stands a good chance of even breaking the 900-rating point barrier, a benchmark for top batsmen, for the second time in his career.

Incidentally, the first time Chanderpaul breached the 900-point mark was also after a Test against New Zealand at Napier in December 2008.

New Zealand’s Ross Taylor in 12th and West Indies’ Marlon Samuels in 19th are the only other batsmen on either side inside the top 20.

Outside the top 20, the batsmen likely to be in action are Darren Bravo in 25th, Kane Williamson in 27th, Brendon McCullum in 34th, BJ Watling in 48th, Kieran Powell in 51stand Denesh Ramdin in 58th.

In the Reliance ICC Player Rankings for Test bowlers, West Indies spinner Shane Shillingford in 16th place is the only bowler inside the top 20.

Outside the top 20, the bowlers likely to feature in the series include Tim Southee in 21st, Trent Boult in 25th, Darren Sammy in 33rd, Doug Bracewell in 43rd, Narsingh Deonarine in 44th, Neil Wagner in 45th and Tino Best in 55th.

The bowlers’ table is headed by Dalen Steyn with compatriot Vernon Philander in second and Sri Lanka’s Ranagana Herath third. 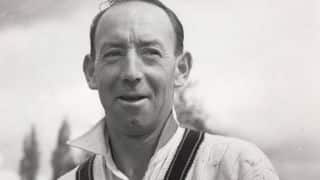