Ross Taylor was on 96 when he drove Raymon Reifer to the boundary to reach the milestone in New Zealand's second innings of the second Test.

Ross Taylor equalled the record for the most hundreds by a New Zealand batsman on Monday, joining his mentor, the late Martin Crowe, and current captain Kane Williamson on 17. He was on 96 when he drove Raymon Reifer to the boundary to reach the milestone in New Zealand’s second innings of the second Test against the West Indies at Seddon Park in Hamilton. It took the 33-year-old Taylor 83 Tests to get to his 17th century compared to 77 for Crowe and 61 for Williamson.

Taylor had said before the start of the West Indies Test that it was a deliberate aim to equal the record on his home ground.”I know if I go through the right preparation, give myself the best chance and continually do that, that I will be able to get to 17, 18 or whatever,” he said on the eve of the Test.”Seventeen is the benchmark that Hogan (Crowe) wanted me to get to and beat. But he said, also, carry on and don’t stop there.”

After being called up for Test duty in late 2007, Taylor scored his first century in his third Test, also at Seddon Park, with 120 against England. With just over two days to play against the West Indies, New Zealand were 263 for eight in their second innings, leading by 413 runs.

Taylor was on 100 with Tim Southee. 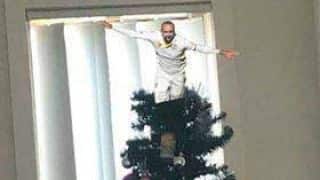