Seth Rance took two wickets in successive balls in his second over, including the prized scalp of Chris Gayle.

Seth Rance sparked a West Indies batting meltdown as New Zealand cruised to a 47-run victory in the opening T20 match at Saxton Oval in Nelson on Friday. Rance took two wickets in successive balls in his second over, including the prized scalp of Chris Gayle, to set the tourists on a downward spiral that ended in the 19th over. New Zealand, sent in to bat first, posted 187 for seven with their total bolstered by 25 off the final over by Mitchell Santner and Tim Southee. But the West Indies, the reigning world T20 champions, never looked like reaching their 188-run target after star batsman Gayle fell cheaply for 12.

Because the batsmen crossed when Gayle skied the ball to Glenn Phillips, Chadwick Walton on seven faced he next Rance delivery and he smacked it straight to Anaru Kitchen at cover-point. It left the West Indies at two for 19 and they never recovered from the initial setback. After 16 overs they were 103 for eight before a late slog by Jerome Taylor (20) and Ashley Nurse (not out 20) produced 28 off 12 before Rance came back for his final over to end the West Indies innings with six balls to spare.

Rance returned the impressive figures of three for 30, while Tim Southee took three for 36. It continued a miserable tour for the West Indies, who were comprehensively outplayed in the two Tests and three one-day internationals earlier in the month. Their luck looked to have changed when Carlos Brathwaite won the toss for the opening Twenty20 and put New Zealand into bat.

Apart from an 86-run stand for the second wicket by Colin Munro (53) and Glenn Phillips (56), New Zealand struggled for runs. They were 162 for seven going into the last over, when Santner launched his late salvo to finish unbeaten on 23 with Southee not out 10. Samuel Badree finished with one for 22 off his four overs while Brathwaite took two for 38.

The second match in the series is in Mount Maunganui on Monday. 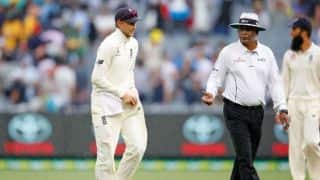