Nick Compton has insisted he feels no extra burden in carrying one of the most famous surnames in English cricket as he bids to follow grandfather Denis into the Test match arena. 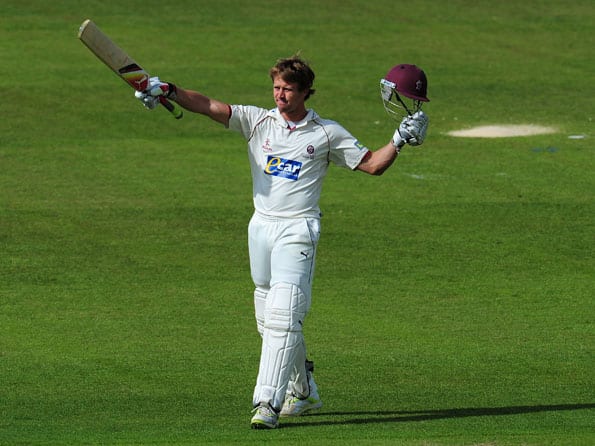 Nick Compton has insisted he feels no extra burden in carrying one of the most famous surnames in English cricket as he bids to follow grandfather Denis into the Test match arena.

Denis Compton was one of England’s all-time great batsmen, averaging over fifty in Test cricket where he scored nearly 6,000 runs in 78 matches with 17 hundreds.

He also did so with a style and panache that have rarely been equalled and the dashing Compton became a national sporting hero in the years after the end of the Second World War.

The Middlesex maestro scored more than 3,000 first class runs in the 1947 season alone — “the greatest cricket season any individual has ever had,” according to his obituary in the respected Wisden Almanack.

It’s a lot to live up to but Nick, born in South Africa, is trying to carve his own niche in cricket history as a batsman.

Having started his career with Middlesex, whose headquarters are at Lord’s where one of the stands is named after his grandfather, Nick joined Somerset in 2010 after falling out of favour.

Despite early season conditions in a rain-sodden England offering plenty of assistance to the seamers and leading to numerous top-order collapses, the 28-year-old has already scored three first-class hundreds for south-west side Somerset, including an unbeaten 204 against Nottinghamshire at Trent Bridge.

He now needs just 285 more runs in a maximum of six innings to become the first batsman since Graeme Hick nearly 25 years ago to top 1,000 first-class runs before the end of May.

Compton will hope to add to his tally and bolster his chances of a Test debut, when he plays for the second-string England Lions against the West Indies at Northampton in a four-day fixture starting Thursday that will be the tourists’ final warm-up match before next week’s first Test at Lord’s.

Having first come to England as a schoolboy, Compton has had plenty of day-to-day experience of dealing with his family history.

“It’s exciting — great to be part of that legacy,” he said. “But none of that is going to get me runs in a Test match.”

Compton said the roots of his current form ran deep.

“You see the results I’ve been getting now, and people tend to look at the recent past,” he said. “But I think batting is a journey, always has been.
“For me, it’s not just been about one winter; it’s the culmination of six, seven, eight, nine, 10 years.”

As for the prospect of 1,000 runs before May, Compton said: “I’m trying to get it out of my mind, because these things can be a distraction.
“But it’s something I’d love to achieve.”

His grandfather, who died aged 78 in 1997, would doubtless approve and Nick said: “It’s something I’ve always been very proud of, that legacy, that family history — to know that I’m a part of something like that.”It’s something I hold very close to me. To what extent it’s had an impact on me would probably be more of a sub-conscious thing.

“I never grew up as a young kid thinking ‘I have to achieve what my grandfather did’. I’ve always been fiercely ambitious inside, and that’s something that’s carried through as I learned more about him and got to know him.

“As you get closer to it, you think it would be a great thing to try to achieve some of the things he did.” (AFP)