Needless to say, Rohit Sharma-led India had the blessings of Sri Lankan supporters as well, leading to their title win on Sunday.

Several Sri Lankan supporters had made it clear before the match that they would be cheering for Team India in the Nidahas Trophy 2018 final against Bangladesh at R Premadasa Stadium, Colombo. The Lankans were eliminated from the tournament courtesy Bangladesh in what was a high-intense battle (well, in every sense). The verbal spat between players from both dugouts didn’t help Bangladesh in the summit clash as well. Amidst all this, Indian skipper Rohit Sharma, ensured not to disappoint Sri Lankan fans. Rohit had arranged two VIP tickets for a Sri Lankan net bowler who had bowled to Indians during their practice sessions. They also visited a supporter’s residence to inquire about his ailing father.

India had hired a few local youngsters for their net practice sessions in the run-up to their tournament-opener. Kaveen Fernando, a 23-year-old all-rounder got injured in the process and had to be admitted to a nearby hospital for two weeks. When Rohit came to know about his health, he quickly arranged for two match tickets for the youngster for the finale.

Here’s what Fernando had to say, “I was bowling at the Indian nets and a straight drive from Rishabh Pant hit me on my face. The blood was coming out from my nose and jaw. I was immediately rushed to the Nawaloka hospital. After being discharged, I feel good,” Fernando was quoted as saying by The Daily Observer.

Rohit’s good deeds seemed to have earned his side support in the nerve-wrecking finale versus Bangladesh. India, courtesy Dinesh Karthik’s 8-ball 29 not out, edged past the opposition with a last-ball six to clinch the title on Sunday. 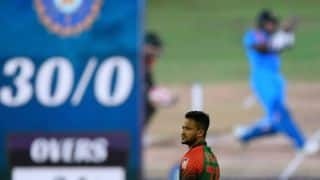