Chasing 139 to win, Nigeria were wobbling at 91/7 before Peter Aho rescued them with an unbeaten 21.

Nigeria secured their maiden ICC Under-19 World Cup qualification after beating Sierra Leone by two wickets in a dramatic clash on the final day of the Africa qualifying tournament.

Chasing 139 to win, Nigeria were wobbling at 91/7 before Peter Aho rescued them with an unbeaten 21 while stitching vital stands with E Boniface (11) and AA Jimoh (12*) for the eighth and ninth wicket respectively.

Aho put in an allround performance as he had earlier taken 2/49 with Sierra Leone bowled out for 138 in 37.3 overs at Affies Park in Windhoek.

Haroun Kamara struck a fighting half-century, hitting 58 off 60 with the help of six fours while OT Sankoh (24) and J Bangura (21) were the other two batsmen to register scores in double-digits. The next best contribution came from extras 20.

In reply, Nigeria lost three wickets early before the pair of Danladi (25) and MK Ikaige (22) rebuild to put them on course.

However, the dismissal of Danladi in the 32nd over triggered a dramatic collapse as they lost four wickets for the addition of 11 runs.

Aho then took charge to take them over the line. 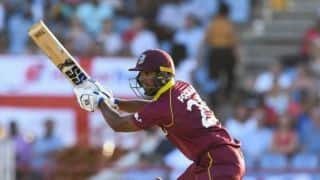