The ICC ODI World Cup Trophy Tour will start its journey from the ICC headquarters in Dubai on Monday, August 27. The trophy will travel across five continents, 21 countries and over 60 cities and give access to a wider range of fans than ever done yet. The trophy tour will venture out to beyond traditional cricket heartlands and connect with fans in a further 11 countries where cricket is growing in popularity. These include the likes of Nepal, Nigeria, France, Germany and USA.

From the United Arab Emirates, the Trophy will travel to Oman, the USA, the West Indies, Sri Lanka, Pakistan, Bangladesh, Nepal, India, New Zealand, Australia, South Africa, Kenya, Rwanda, Nigeria, France, Belgium, the Netherlands and Germany before arriving in England and Wales on 19 February, 2019 for a 100-day domestic Trophy Tour.

During its nine-month journey, the ICC Cricket World Cup Trophy will visit communities, schools, universities and even people’s homes to make it one of the most accessible Trophy Tour yet. Elements of Virtual Reality (VR) tools based on advanced machine learning algorithms and artificial intelligence will serve to provide people with a virtual reality cricket zone that would enable them to have a unique in-stadia experience. Fans would also be able to follow the behind the scenes content related to the worldwide tour on the ICC website.

ICC Chief Executive, David Richardson said: The Trophy Tour is a unique opportunity for fans around the world to be part of the ICC Cricket World Cup and by going to more countries and more cities than ever before we re giving people more opportunities to be part of this fantastic sporting event.

Cricket has more than a billion fans and taking the trophy to new markets is a wonderful chance to raise the profile of the game and engage both new and existing fans as they get the rare opportunity to get up close to the trophy,” he added.

The ICC ODI World Cup 2019 is going to be staged in England and Wales between May 30 and July 14 next year. 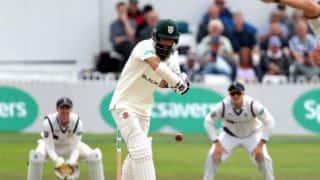