Lodha panel has put an age cap of 70 years for the officer-bearers in the BCCI as well its state associations. Niranjan Shah is 72 years old.

Veteran administrator Niranjan Shah, who has ruled Saurashtra cricket for over four decades, says he is as good as out of the state body post the Supreme Court’s latest order on the implementation of Lodha reforms in Indian cricket. Speaking to PTI, Shah said there is no need for him to resign as secretary of the Saurashtra Cricket Association (SCA) with Lodha recommendation making him ineligible to hold any post in cricket administration. Among other recommendations, Lodha panel has put an age cap of 70 years for the officer-bearers in the BCCI as well its state associations. Shah is 72 years old.

“I am out (of Saurashtra cricket) post the Supreme Court order. There is nothing much to say really and there is no need to resign. The court order very clearly states the eligibility criteria,” Shah told PTI today. Would he be open to any advisory role with the SCA, Shah said: “That is for the next set of office bearers to decide. All I can say is that I leave Saurashtra cricket as a satisfied man. The SCA is one of the best run associations in the country,” he added. Besides ruling Saurashtra cricket, Shah has also held various positions in the BCCI including the post of secretary and vice-president.

Talking about the road ahead for SCA, Shah said confusion remains over how the Lodha reforms need to be implemented, especially the three-year cooling off-period after each term. Confusion also prevails in Tamil Nadu Cricket Association (TNCA), headed by N Srinivasan. TNCA secretary Kasi Viswanathan said the Supreme Court also said that the court order has made him ineligible to continue in his existing post. “There is no question of resigning. I have already been TNCA secretary for more than 10 years and therefore I stand ineligible. The TNCA is calling an executive committee meeting to discuss how to implement the Lodha recommendations,” Viswanathan said.

Going by the Lodha panel, one can’t be an office-bearer in the BCCI or a state association if he has already served for a cumulative period of nine years. The Supreme Court on Monday sacked BCCI president Anurag Thakur and secretary Ajay Shirke for obstructing the implementation of the Lodha reforms. Thakur also faces two showcause notices for contempt of court and perjury. 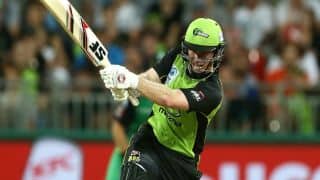