Niroshan Dickwella has been involved in a few altercations of late with the Indian players in the just concluded three-Test series.

Niroshan Dickwella has been involved in a few altercations of late with the Indian players in the just concluded three-Test series. Dickwella tried to get under the skin of a few Indian players, namely Mohammed Shami while trying to save the match by time wasting. While Dickwella was trying to do the same in Delhi, he on the other hand was trying to convince his partner Roshen Silva to go for his century. Although it was a temptation for Roshen, he maintained his calm and fought the temptation as he priortised the match over his personal milestone, which led Sri Lanka snatching a draw. FULL CRICKET SCORECARD: Australia vs England, Ashes 2017-18, 2nd Test at Adelaide (Day-Night)

On Dickwella asking Roshen to go for his century

“I told him ‘Look here, saving the Test match is of paramount importance. You never know with this Indian team. Going for personal milestones, if you lose a wicket, that’s it. Cricket is a funny game.’ I told him to forget about the hundred, we will close shop here. He is a positive guy. His idea was that scoring a hundred on debut that too in India was going to be a huge occasion. He wants to always change the game. I can’t play like him. The scoops and the flicks he plays are unbelievable. What it does is, the other team is on the back foot and not only for him even for the other batsmen they do things differently by spreading the field and stuff,” said Roshen exclusively to Cricbuzz.

On Dickwella’s plan to go for the win

“He wanted to go for the target. We had to score 117 runs in 50 minutes and he said he let’s do history here. Let’s go for it. But I told him, look here. Drawing a game in India is as good as winning one. You can’t change Dickwella’s game. Compared to other players he is different. He shouldn’t change his style. I suggested to him a few things out in the middle, then he said, ‘If I play like that, I will get out. Let me play my game.’ I was confident that he will do the job.”

On playing Ravichandran Ashwin wisely in the second innings

“Thank God I hit that boundary. No one expects to score a duck on debut. I had no clue what happened as I faced only three balls. Since I had been waiting for this opportunity for years, I badly wanted to do well and that’s not the start I wanted. I walked in to bat in the second innings under massive pressure. Another duck and the end of my Test career. Then I thought not to think of this as an international game and to take it like a club match to take the pressure off. Was keen to get my first Test run off a boundary and that took a bit of pressure off.”

On advices from Thilan Samaraweera

“Thilan said that Test cricket is like that and reminded me that I had come here through hard work. He wanted me to believe in my ability. When I came for Tea on the fifth day, he told me if you can score about 65 or 75 and save the game that would secure my place. I was determined to finish it off.”

On playing other leagues rather than playing for Sri Lanka

“I basically wanted to go Australia and play some league cricket. I was very close to throwing away everything and going there. There were some lucrative offers and I was tempted. But I eventually decided that I will keep fighting. Nothing like playing for your country. Today is a dream come true for me. All my patience and hard work has paid off.”

“No one saw that series. But it was as tough as India I would say. First match we were beaten. There were two fast bowlers who were bowling at 145kmph and one guy was bowling at 140kmph. There were two good spinners as well. I think the three knocks that I played in West Indies helped me to get a spot here with the senior side.” 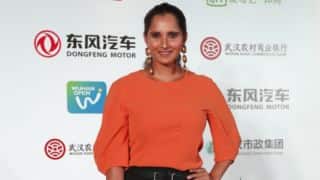 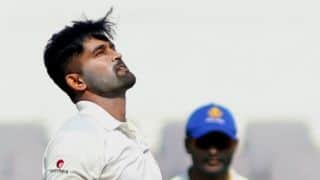