While three cricketers were selected from England and Australia, no Indian could find a place in the playing XI.

The International Cricket Council (ICC) on Wednesday announced its Test and One-Day International (ODI) Teams of the Year 2015. While three cricketers were selected from England and Australia, no Indian could find a place in the playing XI. India’s ace spinner, Ravichandran Ashwin is the only player to be named in the side, but he has been selected as the 12th man. England’s seamer Stuart Broad earned his fifth selection in the ICC Test Team of the Year, whereas their skipper Alastair Cook was selected as the captain of the ICC side. The ICC informed in a press release that the two teams were chosen by a specially appointed selection panel chaired by the ICC’s Cricket Committee chairman and former India captain Anil Kumble.

The ICC added in the release, “Alastair Cook has been named as the captain of the side that includes three Englishmen in Stuart Broad and Joe Root. This is the fifth time since 2009 that Broad has been selected in the ICC Test Team of the Year having previously been included in 2009, 2011, 2012 and 2014. For Cook, this is his fourth selection and his second as captain having achieved that feat in 2013.”

The Chairman of the ICC Awards Selection Panel, Anil Kumble, said, “I would like to congratulate all the players for their selection in the Test and ODI teams of the year. It is an achievement for each of them to be proud of and a recognition for their good performances in the qualifying period. Team selection is one of the toughest jobs and when you have a large pool of outstanding players to select from in a 12-month period then it becomes even more difficult. It was a particularly busy year, with a series of stellar performances throughout the Test and ODI formats, not least in a hugely successful ICC Cricket World Cup 2015, which has greatly enhanced the popularity and profile of the game internationally.”

“Testament to the quality of cricket played is the calibre of players to have missed out on selection. While selecting these squads, the selectors considered various combinations and took into account several factors in overall performances.  Congratulations to all of the players on their selection,” he added.

The ICC also informed that the winners of individual awards will be announced later this month. Following is the ICC Test Team of the Year 2015 (in batting order): 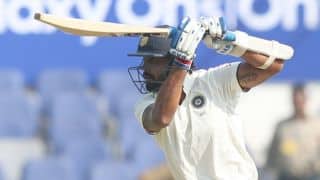 Thank you, Rahul Dravid for the thoughtful lecture: An open letter from a failed cricketer and an avid cricket fan