No regrets of falling one short: Vettori

No regrets of falling one short: Vettori 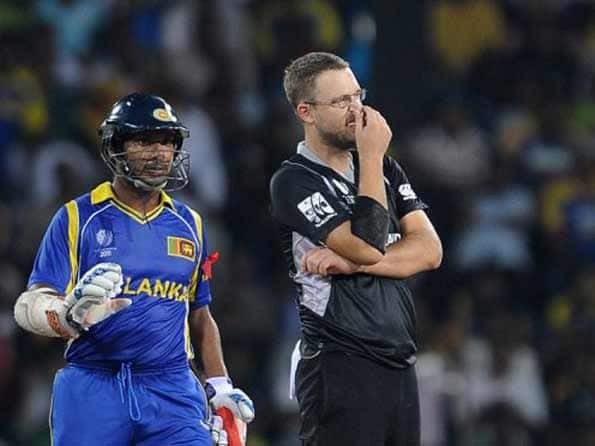 Tuesday’s defeat at the R. Premadasa stadium was New Zealand’s sixth failure to go beyond the semi-final stage, after they were restricted to a below-par 217-run total.

But the Black Caps, who beat South Africa in the quarter-finals, went down fighting. They took four wickets to put Sri Lanka under pressure before the co-hosts pulled it off through the sixth wicket pair of Thilan Samaraweera (23 not out) and Angelo Mathews (14 not out).

“I can only speak for this team. I can’t speak for the teams of yesteryear. We just came up short,” said Vettori, who joins Australia Ricky Ponting and South Africa’s Graeme Smith to step down as one-day captains.

“Obviously we are incredibly disappointed. We fought so hard to stay in the tournament but against Sri Lanka we were short of the best.” Vettori finished with a captaincy record of 41 wins and 33 defeats in 82 one-day internationals with one tie and seven no results.

“Our top order laid a great platform but each time we lost a wicket we failed to establish a new partnership and we lost lots of wickets in the last 10 overs, after which we ended 20 runs short,” said Vettori.

Looking set to make a challenging total when they were at 161-3, New Zealand lost their last seven wickets for just 56 runs, the last six for 25 runs and their four for just four.

Muralitharan, who will retire from one-day cricket after the World Cup, dismissed top-scorer Scott Styris (57) with the final delivery in his last match before a home crowd.

Sri Lanka were well on course with 160-1 before New Zealand staged a fightback, claiming the wickets of Tillakaratne Dilshan (73), Kumar Sangakkara (54), Mahela Jayawardene (one) and Chamara Silva (13) in the space of 25 runs.

“Our whole game plan was to try and get them three down. The Dilshan and Sangakkara partnership went on too long,” Vettori said of the crucial 120-run second wicket stand. “When the opposition has to chase at less than six runs an over, you have to get wickets and we were all about taking wickets and breaking partnerships. But we couldn’t break the sixth wicket partnership.”

Vettori praised Ross Taylor, Tim Southee and Jacob Oram for a successful World Cup. “There were a number of positives, with Oram, Taylor and Southee giving fantastic performances.” Sri Lanka will meet the winners of Wednesday’s Pakistan-India semi-final in the final in Mumbai on Saturday.

My visit will help improve relations with India: Pakistan PM