Styris's brilliant spell left the MI batsmen gasping as they were reduced to 46 for five at a stage.

Mumbai Indians (MI) somehow crawled to a total of 132 runs in their 20 overs against Northern Knights in the Champions League Twenty20 (CLT20) qualifier match. Northern Knights had won the toss and they opted to bowl first. It is all looking bleak for MI as they are in a must win situation. Trent Boult and Tim Southee bowled brilliantly with the new ball and picked up early wickets. Scott Styris too joined the wagon as he was given the ball just before the end of the powerplay. Styris picked up three wickets in his spell of four overs by giving away just 21 runs.

The top order of the MI line up got out way too cheaply than it was expected. None of the batsmen could make an impact in this game. Micheal Hussey was the first batsman to be dismissed and after his dismissal the floodgates opened. Styris’s brilliant spell left the MI batsmen gasping as they were reduced to 46 for five at a stage. The MI skipper Kieron Pollard and Harbhajan Singh showed some resistance in the middle overs and somehow helped them to reach a meagre total of 132 runs.

The Knights have been brilliant on the field throughout all the qualifier matches. Kane Williamson took a brilliant low catch in the cover to dismiss Jalaj Saxena. And their outfileding has also been superb. It has been a good all-round performance by the Knights. On the other hand, Pollard stood tall in the middle and kept the scoreboard ticking. He played his natural game. But unfortunately he too perished in the 17th over and subsequently MI were reduced to 89 for seven. Lasith Malinga and Shreyas Gopal’s late flourish did help MI to get the total past 130. They picked up 43 runs in the last three overs. Southee and Stryis were the pick of the bowlers as they picked up six wickets in tandem.

Lendl Simmons and Hussey helped MI to register their first win of the qualifiers against the Southern Express (SE) in the last match. These two batsmen put on a solid opening partnership of 139 runs from just 88 balls as MI beat SE comprehensively by nine wickets.

With Lahore Lions defeating the Southern Express convincingly by 56 runs, Mumbai Indians have no choice but to win this match against the Knights. If MI lose then Lahore Lions will go through to the main stage along with the Northern Knights. 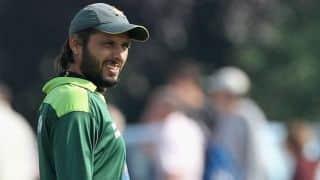