Northern Knights won the toss and chose to field.

Southern Express were 42 for no loss at the end of five overs against Northern Knights in the first qualifying of the Champions League Twenty 20. Kusal Perera was batting on 33, and Danushka Gunathilaka was batting on seven. Earlier, Northern Knights had won the toss and elected to field. Kusal Perera made superb start scoring 31 runs in the first three overs itself. Gunathilaka did not get much of the strike, and watched the carnage from the non-striker’s end. Northern Knights dropped a few catches, which may cost them.

Southern Express qualified for the glitzy and glamorous event by defeating Udarts Rulers in the final of Super 4s T20. Jehan Mubarak will lead the side.

Northern Districts will depend on the likes of Kane Williamson,Trent Boult, Daniel Harris, Daniel Flynn, Ish Sodhi and company to leave an indelible mark in the tournament. They surely need the wisdom of experience from Harris to fire on all cylinders. Boult will have to make crucial breakthroughs upfront. 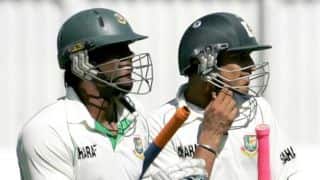