An unexpected downpour in Raipur ended any chances of play as Northern Knights’ mammoth score of 206 for five, helped by the classy Kane Williamson bringing up the fastest hundred in Champions League Twenty20 (CLT20) history as the New Zealanders crossed the 200 mark. The Cape Cobras were blown out of the contest right from ball one as Trent Boult castled Stiaan van Zyl of the first ball off a brilliant outswinger as the required run-rate began to touch stratospheric levels. Hashim Amla played a couple of lovely shots before holing out in the deep just before the rain break as Duckworth/Lewis had the final say to bring bring down curtains on the match as the Knights won by 33 runs

Kane Williamson’s outstanding hundred and the crafty Anton Devcich smashed the bowlers to all parts of the ground in what was more like a firing squad routein for the Cape Cobras as Northern Knights ended with a commanding total in the 3rd match of the Champions League T20 (CLT20). In what was one of the premier batting displays witnessed in the tournament so far, the bowlers kept erring in line and Williamson mixed his charecteristic elegance with the savagery precision of Suresh Raina on song for Chennai Super Kings (CSK).

After going steady in the first few overs, it was absolute carnage from Williamson and Devcich. The second change bowlers of Cape Cobras were taken to the cleaners by CLT20 2014, 3rd match and boundaries flowed off the blade thick and fast. Williamson went after Robin Peterson and Devcich went berserk after Avive Mgijimi and was carted all over the ground. Then Kane Williamson brought up his half-century in just 25 balls and Devcich was closing in on his landmark too.

Anton Devcich got to a well crafted half-century too, determined to match up to the classy brilliance of his partner, Kane Williamson. The bottom-line here was the southpaw got to his half-century too and the last few overs has seen him grow into the game and with some excellent improvisation, was getting boundaries thick and fast. Willliamson shifted gears yet again and more runs flowed of his elegant blade; except that this time some belligerence teamed up with the Kiwi’s natural grace.

A run out brought an end to the 140 run opening stand but wicketkeeper BJ Watling carried on the fireworks and the boundaries were found at will yet again. After a lovely cameo,  Watling departed and triggered a flurry of wickets falling at the other end as Williamson diligently pursued his century. A free hit in the final over presented the chance and the Kiwi took with both hands to send the ball sailing over the cover point boundary to reach his hundred. 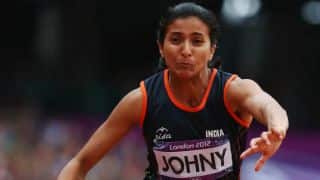