West Indies captain Jason Holder is aware of the threat India are capable of posing when the two sides play the first of their five ODIs on Sunday.

West Indies captain Jason Holder is aware of the threat India are capable of posing when the two sides play the first of their five ODIs on Sunday in Guwahati. West Indies are coming off a 0-2 sweep in the Test series and prior to that a loss to Bangladesh at home, while their opponents India won the Asia Cup under Rohit Sharma and will be bolstered by the return of captain Virat Kohli.

“It won’t be easy with India playing some very good cricket at the moment. They probably are the best one-day side in the world. We expect a tough challenge from them,” Holder said at the pre-match press conference.

West Indies have named a depleted squad without Chris Gayle and Andre Russell, and with Evin Lewis pulling out of the series on Wednesday the make-up of the visiting side has been further hampered. Holder, however, feels this is an opportunity for youngsters to make a name for themselves. Uncapped Guyana opener Chanderpaul Hemraj is likely to make his ODI debut and Sunil Ambris too looks set to play his first ODI since September 2017.

“It’s a young side, a lot of unfamiliar faces. But it is an opportunity for them to showcase what they got,” Holder said.

Holder admitted that West Indies have a lot of work to do, especially in the batting department. “We have not really been able to get consistent scores in excess of 300 which is pretty much a par score and a benchmark in ODI cricket of late. We have spoken this in our dressing room. We need to be hitting the 300-mark more often than not and be consistently doing it,” Holder said.

“No doubt, conditions in India will obviously dictate a run feast. A lot of times you got to be able to set your benchmark, maybe 320. That’s something our batters really need to look at. Consistency is one thing we need to look at, particularly in our batting.”

Without Gayle, Russell and Lewis, the onus will be on Marlon Samuels and his wealth of experience to lead West Indies in the batting department. What works well for the visitors is the fact that Samuels has an incredible record in India. In five tours dating back to 2002, Samuels has stacked up 903 runs in 23 ODIs on Indian soil, at an average of 45.15 and with a strike-rate of 86.74. He has three centuries and six fifties.

Of the current West Indies ODI squad, Samuels is by far the most experienced player with 199 ODIs. Next best is the skipper Holder with 80 caps.

“He’s (Samuels) been around for a while. He is one of our better ODI batsmen. He has done significantly well especially in the recent past. He’s obviously got a wealth of experience and thrives on competition. He is one of the most competitive players I’ve ever come across,” Holder said. “There’s a reason why he’s playing 200 game tomorrow, because he’s done well. Hopefully he will pass the knowledge to the younger lot.” 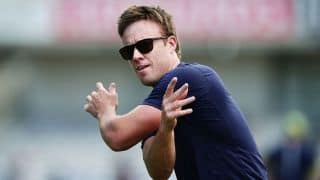