Harry Gurney starred as Nottinghamshire held on to beat Warwickshire by 22 runs to win the English T20 Blast for the first time at Edgbaston on Saturday.

Harry Gurney starred as Nottinghamshire held on to beat Warwickshire by 22 runs to win the English T20 Blast for the first time at Edgbaston on Saturday. After a shaky start batting first, Samit Patel (64 not out) and Brendan Taylor (65) powered Notts to a match-winning total of 190-4. Warwickshire, playing in front of a raucous crowd at their home ground in Birmingham, also lost early wickets though, and despite a brilliant 72 from young batsman Sam Hain, ultimately fell well short. Former England international Twenty20 bowler Gurney was the hero for Nottinghamshire, as he took 4-17 from his four overs with a mix of slower balls and cutters.

Hain put on 55 with big-hitting New Zealander Colin de Grandhomme, but Gurney dismissed them both to leave the lower order with too much to do. Having also won the One-Day Cup final in July, Nottinghamshire are the first side to complete England’s limited-overs double since Hampshire in 2012. Notts had been in big trouble when England seam bowler Chris Woakes reduced them to 30-3, taking the big wickets of his international team-mate Alex Hales, Riki Wessels and Tom Moores. But Zimbabwean batsman Taylor teamed up with England all-rounder Patel to compile a crucial fourth-wicket partnership of 132.

Taylor, who retired from international cricket to forge a county career, holed out off De Grandhomme in the penultimate over, but Australian Dan Christian pummelled the final four balls of the innings for 20 runs. The unlucky bowler was Warwickshire paceman Oli Stone, who bowled four wicketless overs for 50 runs, having starred with 3-29 in the semi-final 11-run win over Glamorgan earlier in the day.

Nottinghamshire had seen off Hampshire by 23 runs in the second semi, with left-armer Gurney and Steven Mullaney both taking three wickets. 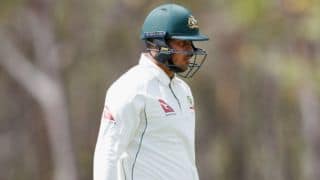