Retired Proteas paceman Makhaya Ntini has been appointed as Cricket South Africa's first Cricket Development Ambassador. Ntini said he was excited to take up the challenge as he embarks on his crusade to develop cricket in his home province of Eastern Cape. 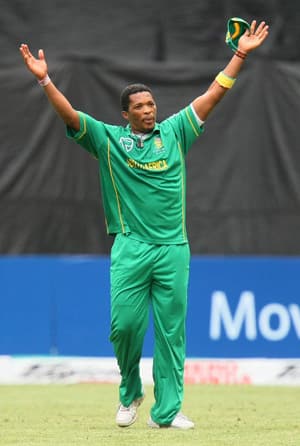 Retired Proteas paceman Makhaya Ntini has been appointed as Cricket South Africa’s first Cricket Development Ambassador. Ntini said he was excited to take up the challenge as he embarks on his crusade to develop cricket in his home province of Eastern Cape.

“I am very happy to continue working with CSA but in this different avenue. I am very passionate about cricket especially in the forgotten parts of South Africa in the rural areas like the one I come from,” he said at the unveiling of the newly renovated G.B Molefe hostel, which houses the CSA Fort Hare Cricket Academy bursary players.

Ntini had himself taken onto the development programme after working as a herdboy in the province to become a world class fast bowler. “This latest journey will allow me to continue spreading the word about cricket and bring the spotlight to the young boys and girls from the smaller areas in South Africa,” Ntini said.

CSA chief executive Gerald Majola said, “Makhaya is a true ambassador of the sport, he has done more for the game of cricket than anybody in promoting the game. We are honoured as CSA that he is lending his name and his time to the development of cricket.”

“We have seen many stars come and go and we at CSA decided that, when Makhaya Ntini retires, he cannot be gone completely from the world of cricket because many players still need to learn from his experience, this is why we believe that he is the perfect candidate for the post of Ambassador of Cricket Development,” Majola added.

Ntini, amongst other things, will help CSA identify areas that need the most assistance to put developmental structures in place. He will also be an active talent scout in these areas to ensure that a steady flow of the stars of tomorrow comes from the Eastern Cape. Majola also handed over cricket equipment to rural cricket teams on behalf of long time CSA friend, Dubai businessman, Shyam Bhatia of Cricket for Care.

Representatives from the rural teams were accepted the kit. Majola extended his thanks to Bhatia, who was unable to attend the event. “Shyam is passionate about spreading the development of cricket throughout underprivileged areas worldwide but more specifically in the rural areas and I would like to thank him for his continued support of South African cricket and his generosity towards the development of the game.”