It came off the middle of the bat and sailed into the stands. Kohli was in the dugout and his reaction suggested that he was awestruck.

India skipper Virat Kohli was amazed when lower-order batsman Navdeep Saini smashed a six off New Zealand’s Kylie Jamieson in the 45th over on Sunday during the second ODI at Eden Park, Auckland.

It was a back-of-a-length delivery, a touch outside off and Saini threw the kitchen sink at it.

It came off the middle of the bat and sailed into the stands. Kohli was in the dugout and his reaction suggested that he was awestruck. The 31-year-old instantly stood up to laud the hit.

Saini was cleaned up of the very next ball trying to go for the maximum again. He departed for a quick-fire 45 off 49 balls. His innings comprised of five fours and two sixes. He stitched a partnership with Ravindra Jadeja off 76 runs and gave India a glimmer of hope of a win.

Chasing 274 to win, India lost wickets at regular intervals and were reduced to 153 for seven in the 32nd over. The top-order failed to deliver and eventually, India lost the match by 22 runs and the three-match series 2-0.

After the game, Kohli praised Saini at the post-match presentation and said that he did not know the pacer could bat so well.

“We didn’t know how good Saini could be with the bat, so if the lower order could be that good, then it inspires the middle order and the top order to step it up too,” said Kohli.

NZ’s Kylie Jamieson bagged the Man of the match for picking two wickets for 42 runs in 10 overs. He picked the crucial wickets of opener Prithvi Shaw and Saini. 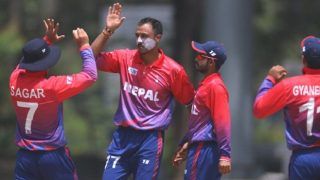