For Jharkhand, it was yet another top-order failure.

Sarfaraj Ashraf foxed Odisha with his guile and returned with five for 25  to restrict Odisha to 119 for eight after they elected to bat but the rookie left-armer’s magnificent effort went in vain with Jharkhand batters putting up a mindless display.

Having returned wicket-less, Mohanty might not have found his name in the scores section but the Odisha pacer played a crucial role with tidy bowling figures of 4-1-11-0 that set up the win.

Jharkhand had two set batsmen in Virat Singh and Kumar Deobrat as they needed 16 from 12 balls but the lanky Odisha pacer bowled a tight penultimate over conceding seven to create pressure around the duo.

For Jharkhand, it was yet another top order failure as the experienced skipper Saurabh Tiwary (4) continued his woeful run, while Ishank Jaggi (21) too did not contribute much before Virat and Deobrat revived their chase.

Earlier left-armer Sarfaraz, playing only his third match, bowled with a lot of variety as the Odisha batsmen could not pick his bowling.

He dismissed skipper Biplab Samantray (16) and Anurag Sarangi (22) in one over and returned to take three wickets in the last over in his careerbest bowling as Odisha failed to take off in the slog overs to be restricted to 119 for eight.

With two wins from three matches, Odisha and Assam are on equal eight points each as one of the two teams will join Bengal (12) to qualify into the main round.

Odisha will face Bengal at the Eden, while Assam will take on Jharkhand at JU second campus ground in Saltlake in the concluding zonal league. 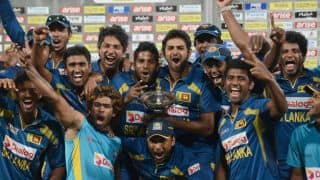