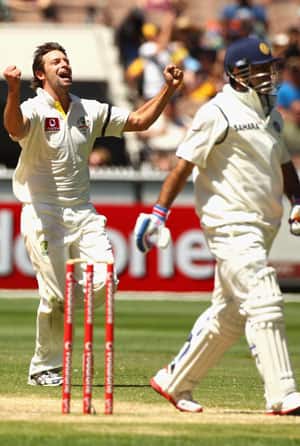 Hilfenhaus revived his Test career with five for 75 here Wednesday morning to restrict India to 282 in the first innings in the first Test at the Melbourne Cricket Ground (MCG).

“Over the pre-season, I spent a fair bit of time with (Tasmania bowling coach) Ali de Winter, identifying a few technical problems. I tried to fix them and feel like I’m on my way back. Most of the work over the off-season was based on technique and learning to use the crease a bit better and getting up and over my front knee basically,” said Hilfenhaus, who was dropped from the Test squad after a disastrous Ashes series last summer.

“So I guess today was just about banging that area. It’s got a little bit of movement there if the ball’s in the right area and it’s hard to start,” he said.

Hilfenhaus said he never lost after being dropped and worked hard to get back into the team.

“Obviously a fair bit of hard work went into pre-season, a fair bit of time in the gym and as I said on the technical side of things. I guess it’s quite rewarding to be back in the baggy green. Hopefully, I can continue and get better. I never thought it was the end. I just knew that hopefully one day if I keep doing the things I can control and fix the things I needed to fix that I could always put my hand up there and say that I’m a swing bowler,” he said.

Hilfenhaus admitted that he was “the lucky one who came away with the rewards”.

“We identified we needed to start well with the ball and as a bowling group we felt like we did that and I was probably the lucky one who came away with the rewards. Everyone offers something a bit different and it’s great to see the depth of Australian bowling at the moment,” he said.(IANS)