Oman will face the Netherlands in the third match of the Desert T20 2017. The match will be played at the Sheikh Zayed Stadium, Abu Dhabi. Both teams play in Group B.

Oman will face the Netherlands in the third match of the Desert T20 2017. The match will be played at the Sheikh Zayed Stadium, Abu Dhabi. Both teams play in Group B. The live cricket telecast of the match will be available on Sky Sports and the live streaming is available on skysports.com. Both Oman and Netherlands are coming off defeats and will look to start the tournament with a victory. The Desert T20 Challenge is played by 8 teams. The teams have been divided in to Group A and Group B with each having four teams. Each team will play one match with all the other members of their respective groups and aim to acquire highest points and reach the final.

The Group A of the Desert T20 2017 tournament consists of Afghanistan, Ireland, United Arab Emirates and Namibia. The opening day of the tournament saw the teams from this group contesting against each other. In the opening match of the Desert T20 2017 tournament, Scotland scored 189 batting first and defeated Hong Kong by 24 runs. In the second match, which was played on the same day in the evening, Afghanistan took on Ireland and emerged victorious by 5 wickets chasing 126 runs. Afghanistan won with 8 balls to spare. In this tournament, Oman will be captained by the 39-year-old Sultan Ahmed.

In their previous match, Oman were handed a defeat by USA in their last match. It was a high-scoring match and a close one as Oman fought till the end. USA had put up 208 after their innings. Bowling for Oman, Rajeshkumar Ranpura, Mohammad Nadeem and Zeeshan Maqsood were successful with wickets but were unable to restrict USA for an achievable total. Zeeshan Siddiqui scored a magnificent 58 but failed to save the side from defeat. Netherlands last encounter was also a high-scorer. They faced Nepal in their last match. Nepal put up 217 for Netherlands to chase. Roelof van der Merwe was the highest run-scorer for Netherlands scoring 56 while Tim Guijters and Timm der Gugten s efforts were commendable. However, they lost the match by 19 runs. Both teams will look to move on from the defeats and start Desert T20 2017 with a win. 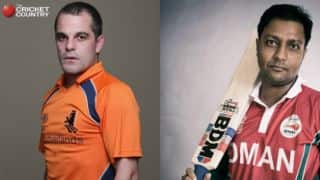 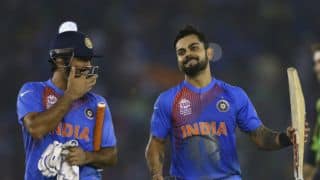 Virat Kohli: Delighted to captain India in all formats