England vs New Zealand World Cup Final: As luck would the Super Over ended in a tie but England were declared winners as they had a superior boundary count. 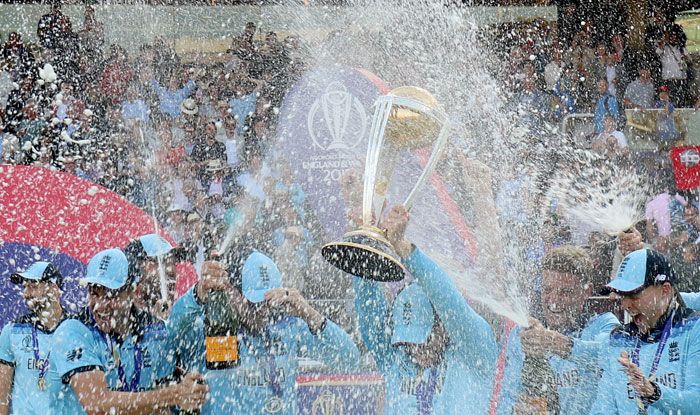 England lifted their maiden ODI World Cup trophy on July 14, 2019 at the hallowed Lord’s Cricket Ground beating New Zealand in a dramatic fashion. Nobody would have envisaged the manner in which the final few minutes of the finale played out with nothing separating the two teams but the boundary counts.

After both England and New Zealand finished on level terms in their respective allotted quota of 50 overs each, the contest headed into Super Over. And as luck would have it, that too, ended in a tie but England were declared winners as they had a superior boundary count.

England, owing to their limited-overs form in the run-up to the world cup, were the favourites. They won all but three of their matches en route to the final. On the other hand, New Zealand, who finished runners-up in 2015, took a similar route to the final with just three defeats.

New Zealand captain Kane Williamson opted to bat first. Henry Nicholls scored a fifty while Tom Latham contributed with 47 as they posted a middling 241/8. England had set the world cup on fire with their fearless batting. However, the pitch and some tight bowling from New Zealand meant the chase didn’t turn out to be a joyride. In fact, they were pushed to the brink before talisman Ben Stokes stepped up and almost singlehandedly dragged them over the line. Stokes scored an unbeaten 89 as England were bowled out for 241.

New Zealand could have dismissed Stokes in the penultimate over had Trent Boult not stepped on the boundary while completing a regulation catch. England needed 22 from nine deliveries when that Boult ended up committing.

England needed 15 from the final over with two wickets in hand. Boult’s first two deliveries resulted were dot balls. Stokes clubbed the third for a six reducing the equation to 9 from three.

Stokes sent a full toss to midwicket region and set off for a couple. However, as he was about to complete the second run, Stokes dived and the ball deflected from his bat and rolled past the long-on boundary. The umpire awarded six runs to England. The shock on New Zealand and their fans was evident. Stokes just held up his arms in apology.

With three needed off the final two, England managed two as Adil Rashid and Mark Wood were run out. Both the teams finished on level terms and the contest headed for a Super Over.

Boult took the bowl as England sent out Stokes and Jos Buttler. With the help of two fours, England scored 15 runs. England captain threw the ball to Jofra Archer whose first two deliveries resulted in nine runs. With two needed from the final delivery, Martin Guptill was run-out as he attempted for the second run. England became the ODI World champions for the first time in their history.