On This Day: Sourav Ganguly And Rahul Dravid Made Their Test Debuts vs England at Lord’s Cricket Ground

On This Day: Sourav Ganguly And Rahul Dravid Made Their Test Debuts vs England at Lord’s Cricket Ground

Ganguly celebrated the occasion by becoming the 10th Indian batsman to register a century on Test debut, while Dravid missed out on the landmark by five runs.

The date June 20 holds a special significance in Indian cricket history as some of the finest and greatest batters made their Test debuts on this day. Apart from present India captain Virat Kohli, it was the former skipper’s – Sourav Ganguly and Rahul Dravid, who announced themselves at cricket’s grandest stage – the Lord’s Cricket Ground against England – on June 20, 1996. Ganguly and Dravid are widely hailed as two of India’s best batsmen, had scripted several memorable knocks for the country.

In the world of sports, international debuts are moments to cherish for lifetime and many players leave no stone unturned to make these moments unforgettable. While Ganguly went on to score a brilliant hundred on his Test debut, Dravid missed the elusive three-figure mark by just 5 runs. With that, the left-hander also became the then 10th Indian batsman to register a century.

“He (Ganguly) batted at 3, I came in at 7 in that game. So I had a long time to watch him bat and bat very well actually. I did feel really nice for him that he got that hundred,” said Dravid in a video posted by the ICC on their Twitter handle.

“And from my side, it was like I also have a chance to make it count. So, when he got out I used it a little bit as a motivation and an inspiration,” he added.

Ganguly played a superb knock of 131 for which he consumed 301 deliveries. The stylish knock was studded with 20 boundaries. Dravid, meanwhile, faced 267 deliveries during his knock which consisted of 6 boundaries.

“I was too engrossed in my performance to be honest. When he (Dravid) came into bat, I was already at 70 odd,” recalled Ganguly.

Rahul Dravid 9️⃣5️⃣ #OnThisDay in 1996 at Lord’s, two of India’s best batsmen made their Test debuts 🌟

“I remember my 100 scoring shot which was a cover drive through point and he was at the non-striker’s end. I finished the day at 131, I got out an hour after tea and he carried on,” he added.

“He came back the next morning and got 95. I was standing at the Lord’s balcony hoping that he would get a hundred.

“I have seen him play at the under 15s, then Ranji Trophy together. I had seen his debut at Eden Gardens and then seeing his debut at Lord’s. So, I watched his career closely. It would have been great had we both got hundreds that day,” added the current BCCI chief.

Ganguly and Dravid would go on to become two of India’s best batsmen forming part of the Fab Five, and later be appointed Test captains.

Ganguly played 113 Tests for India, scoring 7212 runs at an average of 42.17 with 16 centuries and 35 fifties, before retiring after the 2008 Border-Gavaskar Trophy in India. Ganguly enjoyed a fine captaincy reign as under him, India won 21 Tests out of 49 matches. He led India to their first Test win in Australia in 22 years and a first-ever Test series win in Pakistan. 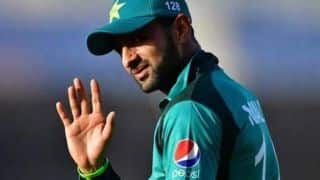 Not in a Position to Resume Cricket: Rahul Dravid