Richard Hadlee's new-ball partner for the longest time, Chatfield had a scary beginning to his international career in 1975 when England bowler Peter Lever's bouncer struck him on the temple and he immediately fell unconscious exactly 35 years ago in his debut Test for New Zealand.

The first Test he played could well have been his last but Ewen Chatfield didn’t just live to tell the tale but also enjoyed an enduring love affair with cricket, which ended only after he turned 68.

Richard Hadlee’s new-ball partner for the longest time, Chatfield had a scary beginning to his international career in 1975 when England bowler Peter Lever’s bouncer struck him on the temple and he immediately fell unconscious exactly 35 years ago in his debut Test for New Zealand.

He had swallowed his tongue after getting concussed. He was saved by opposition team physio Bernard Thomas, who sprinted onto the Eden Park to give the player mouth-to-mouth resuscitation before being rushed to the hospital.

In an interview to PTI, Chatfield spoke about how the incident impacted him but asserted that he never felt he would not be able to make a comeback.

“I mean I didn’t go through any concussion test. It was not needed because I was already knocked out by that bouncer. I was obviously concussed,” Chatfield added with a dash of humour.

Chatfield played his final first-class game in 1990 but his swansong cricket match was as recently as in 2019 when he turned up one last time for his club Naenae Park.

What mental adjustments did he make once he was back after recovering from the concussion against Australia in 1977?

“I don’t know about others but I can talk about myself and what I feel. Those were the days (1975) when helmets weren’t there. So when I started playing again (1977), I got myself a helmet and it gave me confidence,” Chatfield said.

“Look, I wasn’t technically the best batsman around so the helmet helped me regain a bit of confidence to play the game. Obviously, I wouldn’t be picked if I couldn’t bat,” he added.

But even back in 1975 when concussion as a subject was not in vogue, Chatfield went through concussion protocols and he is happy that ICC has put rules in place.

“I took a break for six to seven weeks and all the winter and I kept going to the doctor till he was satisfied that I was cleared to play,” he said.

“If you look at it, it’s pretty similar to what happens now. ICC has rightly got a protocol in place now. All players need to go through it now and aren’t allowed to play until protocols are fulfilled,” he added.

Chatfield was at best a medium pacer but for nearly 10 years, he complemented the great Richard Hadlee, something he is still proud of.

“Richard and I were not the norm as new ball pairs because he was bowling in 140s and I was just about late 120s when it came to speed. Unusual it was but during that phase, New Zealand didn’t have any other quicker bowlers to partner Richard. So I made the team” he recalled.

“I was told that my specific job was to keep one end tight and let Richard attack at the other end,” Chatfield seemed refreshingly candid about his stint in international cricket which fetched him 263 wickets (123 in Tests and 140 in ODIs).

“I was just happy to be selected in the New Zealand side and it didn’t matter where really. Just that during that time, we didn’t have any other opening bowlers to partner Richard. But looking back, we were pretty successful,” he said with pride.

But Chatfield finds the current trio of Tim Southee, Trent Boult and Neil Wagner extremely fascinating as they have enjoyed more than decent amount of success.

“All bowling partnerships are different. It’s hard to compare one with other but the latest one with Boult and Southee and Wagner has been a very, very successful partnership,” he said.

India were comprehensively beaten by New Zealand in the opening Test here and Chatfield said it was more about not playing a lot in seaming conditions.

“think New Zealand bowled really well. Indian batsmen are not used to playing on seaming tracks in their home conditions and it was visible,” said Chatfield, who did some commentary on the first day of the Test. 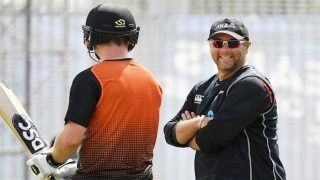 Throwing Their Hands at The Ball Like They do in India: Craig McMillan

Don't think being cautious will help us: Kohli's message to Pujara & Co