For the third time in as many matches, the Indian Premier League (IPL) 2017 will host the opening ceremony at the Saurashtra Cricket Association Stadium, (SCA) Rajkot. The occasion will be the Match No. 3 between Gujarat Lions (GL) and Kolkata Knight Riders (KKR). The Board of Cricket for Control in India (BCCI) came up with the new initiative of hosting eight opening ceremonies at as many venues to up the excitement level. The opening ceremony will begin at IST 18:00. The live telecast of the second opening ceremony of IPL 10 will be available on Set Max, Sony Six, Sony Six HD, Sony ESPN and Sony ESPN HD. The live online streaming of IPL 2017 opening ceremonies will be available at ESPN, SonyLIV and Hotstar. Full Cricket Scorecard, GL vs KKR, Match 3

The first of the eight opening ceremonies was held on the opening day of IPL 2017 at the Rajiv Gandhi International Stadium in Hyderabad just before the first game of the tournament was played between reigning champions Sunrisers Hyderabad (SRH) and last year s runners-up Royal Challengers Bangalore (RCB). While the second opening ceremony of the tournament was held before the second match between Rising Pune Supergiant (RPS) and Mumbai Indians (MI).

Coming to the third match, the Suresh Raina-led GL performed impressively in the previous edition, which was also their first in IPL. GL reached play-offs and were also the table toppers in last season. On the other hand, KKR, the two-time IPL champion are one of the most strongest teams with Gautam Gambhir as their captain.

Taking into consideration all these aspects, we can definitely guarantee that we are in for a cracker of contest at Rajkot. 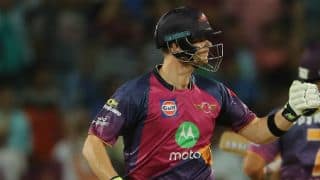